Fiber optic couplers are optical devices that connect three or more fiber ends, dividing one input between two or more outputs, or combining two or more inputs into one output. The device allows the transmission of light waves through multiple paths.

Fiber optic couplers can either be passive or active devices.

Passive fiber optic couplers are said to be passive as no power is required for operation. They are simple fiber optic components that are used to redirect light waves. Passive couplers either use micro-lenses, graded-refractive-index (GRIN) rods and beam splitters, optical mixers, or splice and fuse the core of the optical fibers together.

Types of fiber optic couplers include splitters, combiners, X-couplers, trees, and stars, which all include single window, dual window, or wideband transmissions.

Fiber optic splitters take an optical signal and supply two outputs. They can further be described as either Y-couplers or T-couplers.

Fiber optic combiners receive two signals and provide a single output. The output signal is typically comprised of multiple wavelengths, due to the amount of interference that occurs when attempting to combine two signals that share the same wavelength.

X-couplers carry out the function of a splitter and combiner in one package. They are a 2x2 coupler that combines the power of two signals and then divides the signal between two outputs.

Star couplers have M inputs and N outputs (MxN). They are used to distribute the power from all of the inputs to all outputs.

Tee couplers either have 1 input and M outputs (1xM) or N inputs and 1 output (Nx1).

When specifying optical couplers you should consider the fiber optic cable, the coupler type, signal wavelength, number of inputs and outputs, as well as insertion loss, splitting ratio, and polarization dependent loss (PDL).

Optical couplers support one of two cable types, single mode or multimode, which will allow either single or multiple paths for light to travel through the fiber respectively. Multimode cables limit the distance that the signal can travel as multiple paths of transmission cause modes of light to disperse limiting the transmission bandwidth. Multimode may be further classified as being step-index or graded-index. Graded-index fibers have improved operational characteristics; the refractive index gradient refracts separate modes of light propagation towards the central core, limiting the dispersion rate.

Number of Inputs and Outputs

Optical couplers can be specified by the number of ports used for signal transmissions going in as well as out. The number and type of ports will be used to describe whether the device is in a splitter, combiner, X-coupler, star or tree coupler.

Optical couplers should be selected based on the bandwidth or window. Regardless of the port types used, fiber optic couplers can be designed for single window, dual wavelength or wideband transmissions.

The electromagnetic spectrum encompasses all frequencies and wavelengths of light. The visible spectrum is a finite range of wavelengths that can be detected by the human eye. Fiber optic couplers transmit light waves from the far visible region, red (630nm), to the near infrared region (1700nm). Within this region specific frequency bands are used as to avoid absorption bands within the carrier medium, the optical fiber. Wavelength choices for fiber optic couplers include 633 nm, 830 nm, 1060 nm, 1300 nm, and 1550 nm. 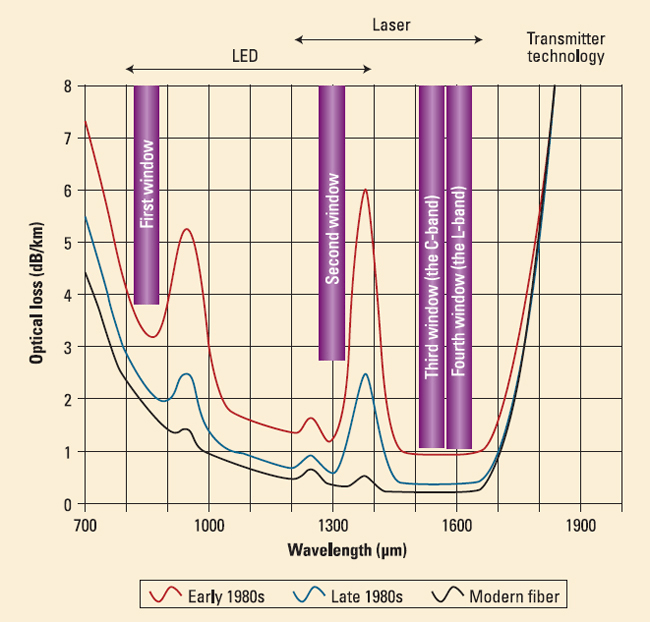 Fiber optic components disrupt signal transmissions as the continuous core of the optical fiber carrying the signal mates with the component in a manner that causes some amount of scattering and reflection of light waves. The degree to which the signal has been depleted is described as insertion loss, which is the undesired attenuation of the signal measured in decibels (dB).