Gyroscopes are designed to measure angular rate or orientation about a given directional vector. They usually take the form of a disc-shaped object or rotor which is suspended in light supporting rings called gimbals. The gimbals have nearly-frictionless bearings which isolate the central disc from outside torque.

When the gyroscope is spun on its axis at high speeds it resists movements in certain directions and demonstrates extraordinary stability of balance as seen in the video below. Traditional gyroscopes work on the basis that a spinning object that is tilted perpendicularly to the direction of the spin will have a precession. The precession keeps the device oriented in a vertical direction so the angle relative to the reference surface can be measured. Multi-axis gyros provide measurements in two or three orthogonal directions.

The animation below shows a gyroscope precessing round a tower (shown in red). The gyroscope is shown in grey with the frame/cage/bearings in yellow.

Gyroscopes are used in many applications including learning environments, modes of transportation, and robotics. In learning environments they are often used as a way to demonstrate how a gyroscope can continually point in one direction. In various cars, bikes, and ships engines mimic the behavior of a gyroscope. In racing cars the gyroscopic forces from the engine help keep the car on the track. They make motorbikes easier to balance when moving and gyroscopes are used to staiblize ships.

There are two basic types of gyroscopes: rate and rate-integrating.

Rate gyros are single degree-of-freedom (SDOF) devices with a primarily elastic restraint of the spin axis about the output axis.  The output signal is produced by precession of the gimbal, which is proportional to the angular rate of the case about the input axis. Most gyroscopes are rate gyros.

Rate-integrating gyros are also SDOF devices, but use a primarily viscous restraint of the spin axis about the output axis.The output signal is produced by precession of the gimbal, which is proportional to the integral of the angular rate of the case about the input axis.

Selecting gyroscopes requires an understanding of angular rate measurement techniques. Optical gyros permit the reflection of a laser ray many times within an enclosure. If the enclosure rotates, the duration between the moment of laser emittance and eventual reception differs.

Optical — Optical gyros permit the reflection of a laser ray many times within an enclosure. If the enclosure rotates, the duration between the moment of laser emittance and eventual reception is different. The laser emitter deteriorates over time, however, and the fiber is fragile and has a limited life.

Spinning mass — Spinning mass gyros use a steadily-moving mass with a free-moving axis (gimbal). They are very fragile and require regular maintenance. When a spinning mass gyro is titled, the gyroscopic effect causes precession — motion orthogonal to the direction tilt sense—along the axis of the rotating mass, indicating that the angle has moved. Because mechanical constraints cause numerous error factors, the axis of a spinning mass gyro is usually fixed with springs. Spring tension is proportional to the precession speed. Dry-tuned gyros or dynamically tuned gyros are spinning mass gyros that are designed to cause very small mechanical constraints once the spinning speed reaches the specified velocity. A dynamically tuned gyro should not be confused with a gyrocompass, a large spinning-mass device that is made to rotate and maintain the same direction as the earth's rotation. Gyrocompasses provide true north readings at all times, whereas dry-tuned gyros provide information about the relative change of angles.

Vibrating - Vibrating gyros use micro-electro-mechanical system (MEMS) technology and a vibrating, quartz tuning-fork to measure Coriolis force. When rotated, a vibrating element (vibrating resonator) is subjected to the Coriolis effect, causing secondary vibration orthogonal to the original vibrating direction. By sensing the secondary vibration, the gyro can detect the rate of turn. Some vibrating gyros are called piezo, ceramic or quartz gyros because they use the piezo-electric effect to exert and detect vibration. Note,  that vibration and detection do not necessarily use the piezo effect. Most piezo, ceramic, and quartz gyros are mass-produced and require little maintenance. Products that use a tuning fork or beam-shaped (often triangular) vibrating element with solid support to the base or case may not be able to distinguish between secondary vibration and external vibration. Dumpers that affect rotational motion only worsen the gyro's response. As a result, some suppliers use a ring-shaped element that is suspended by spokes and vibrates up and down in a squeezed, oval-shaped motion. With this design, external vibration does not cause the squeezed, oval vibration mode. The lateral-only suspension from the surrounding spokes protects the element from linear vibrations and shocks regardless of how the gyro is strapped down to the base.

Physical specifications for both types of gyroscopes include maximum dimension and weight. Please click here for additional calculations.

The output signal is produced by precession of the gimbal, but is proportional to the integral of the angular rate of the case about the input axis. Output options include analog voltage, current loop, pulse or frequency, and switch or relay outputs. 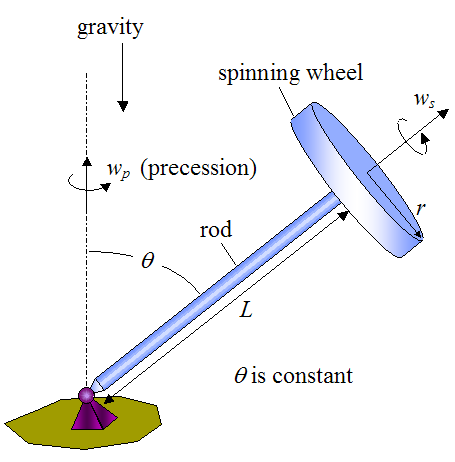 Angular rate range is the maximum rotary rate for which the gyro is rated. If one product or series can be configured for different rates, then the range of maxima is listed.

Angular linearity or rotary axis linearity is measured over an operating temperature range as a percentage (±) of full scale.
Angular bandwidth is the frequency range over which the gyroscope meets accuracy specifications before rolling off.
Because gyros are almost always capable of DC response, only the high-frequency 3-dB roll-off point is included.

Gyroscopes must adhere to various specifications and standards to ensure proper design and functionality. Examples of these standards are listed below. For a more detailed list, please visit the IHS standards site.

MEMS Gyroscopes and their Applications