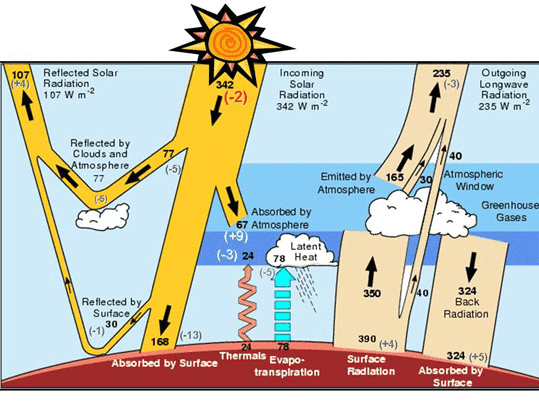 In the image above, then, the global solar radiation would be 198 W·m2, while the net radiation (penetrating radiation - reflected radiation) is 168 W·m2.

Solar radiation instruments are used to measure and record solar irradiance, which is one of several variables to consider when discussing radiometry. Being a unit of power, irradiance is measured and discussed using watts per square meter of surface (W·m2). When using solar radiation instruments, the "surface" being discussed is typically the surface of the Earth or a solar panel.

The irradiance of a beam of monochromatic light can be manually calculated using the formula below.

n = refractive index of the surface

c = speed of light within a vacuum

The graph below shows the typical irradiance of two types of sunlight: the sunlight above the atmosphere (yellow) and the surface radiation at sea level (red). Note that irradiance peaks within the visible spectrum and decreases at higher and lower wavelengths. 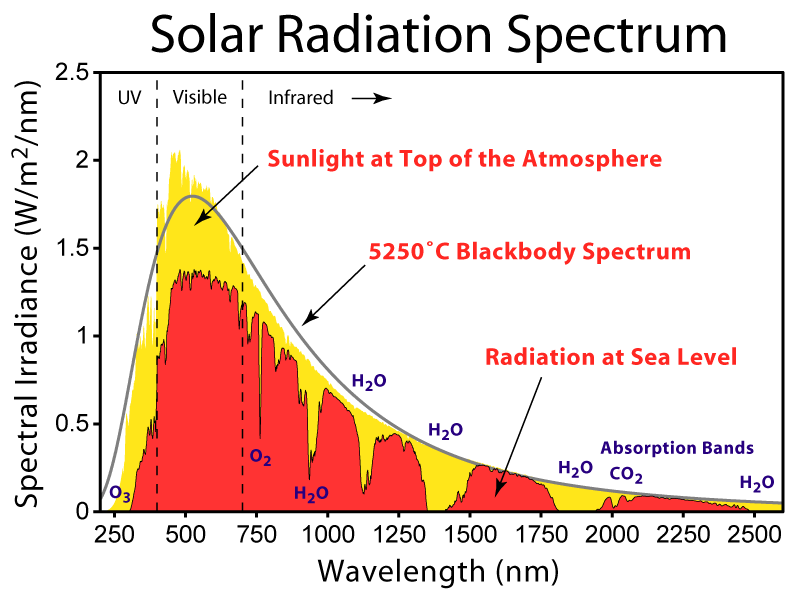 Pyranometers measure hemispherical solar irradiance, or broadband solar radiation within a 180-degree field of view; this may be considered the global solar radiation of a given hemisphere.

A typical analog pyranometer does not require power to operate and consists of a thermopile sensor beneath a glass dome. The thermopile absorbs all the solar radiation which encounters it and generates a small, proportional output voltage. Pyranometers are typically used on or near solar panels to facilitate optimum panel positioning. 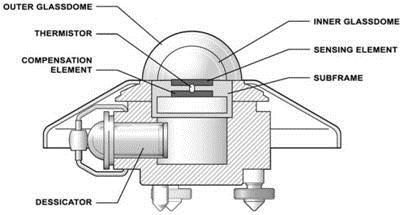 Pyrheliometers are similar to pyranometers, but they are designed to measure only direct beam solar irradiance. To this end they are occasionally used in identical pyranometer applications, but are also used with solar tracking systems to ensure the system is consistently aimed toward the sun. The device itself is often mounted directly on the tracking system so that it is always measuring direct beam sunlight.

Sunlight enters pyrheliometers through an integral lens, which projects sunlight onto a thermocouple within the device. Most pyrheliometers can convert a thermopile's small voltage output into watts per square meter and either output or record this data. 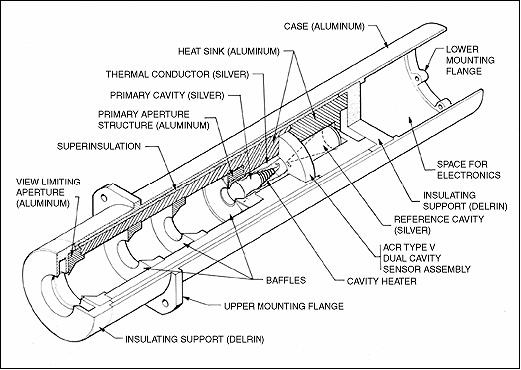 The cross-section of a typical pyrheliometer; this device would be mounted on a tracking system.

Quantum sensors are specialized devices which measure the quantity of photosynthetically active radiation — or the portion of the visible spectrum which can be used by photosynthetic organisms — within a band of solar radiation. Specifically, quantum sensors measure the photosynthetic photon flux density (PPFD) of sunlight. This measurement is useful in agriculture for choosing productive farmland locations or maintaining growhouses, and is also used in oceanography to calculate the boundaries of an ocean's sunlight zone. (For the latter reason, quantum sensors are often built with waterproof housing.) 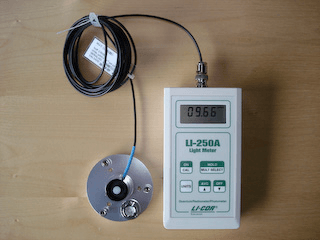 A quantum sensor attached to a light meter.

Instruments used to measure solar radiation may be governed in production, use, and testing by various standards. A few example standards are listed below. The ISO 9060 standard is a commonly-used document for classifying and using pyranometers.

Institute for Earth Science Research and Education - Build your own pyranometer