Refrigerant compressors work by taking in low pressure gas on the inlet and compressing it mechanically.  Different types of compression mechanisms are what differentiate compressors (discussed below). This compression creates a high temperature, high pressure gas - an essential step in the overarching refrigeration cycle.

The refrigeration cycle or heat pump cycle is the model  describing the transfer of heat from regions of lower temperature to regions of higher temperature. It defines the operating principles behind refrigerators, air conditioners, heaters, and other "heat pumping" devices.

This diagram presents a visual overview of the refrigeration cycle:

Temperature-entropy and pressure-enthalpy diagrams are often used to construct and describe these systems. They define the properties of the fluid at different stages in the system.

The diagram below depicts temperature-entropy a typical refrigeration cycle: 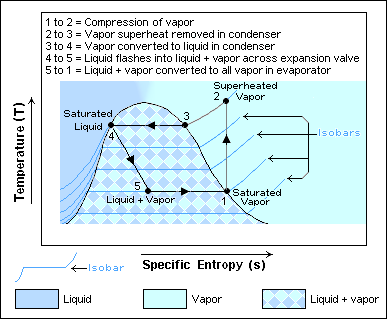 The following diagram shows pressure-entropy of a typical refrigeration cycle:

Piston compressors, also called reciprocating compressors, use a piston and cylinder arrangement to provide compressive force - like combustion engines or piston pumps. The reciprocating motion of the piston due to external power compresses the refrigerant inside the cylinder. Piston compressors have a low initial cost and a simple, easy to install design. They have a large power output range and can reach extremely high pressures. However, they have high maintenance costs, potential vibrational issues, and are not typically designed to run continuously at full capacity.

Rotary compressors have two rotating elements, like gears, between which the refrigerant is compressed. These compressors are very efficient because the actions of taking in refrigerant and compressing refrigerant occur simultaneously. They have very few moving parts, low rotational speeds, low initial and maintenance costs, and are forgiving in dirty environments. However, they are limited to smaller volumes of the gas and produce less pressure than other types of compressors.

Screw compressors use a pair of helical rotors or screws which mesh together to compress the refrigerant between them. They can produce high pressure for a small quantity of gas and consume less power than reciprocating compressors. They have low to medium initial and maintenance costs and few moving parts. However, they have difficulty in dirty environments, high rotational speeds, and shorter life expectancies than other designs.

Usually compressors are designed to work with a particular type of refrigerant. Selecting a proper refrigeration compressor or air conditioning compressor requires finding a compressor rated for the desired refrigerant for the application. Refrigerants are given names such as R-13 or R-134a from the American Society of Heating, Refrigerating and Air-Conditioning Engineers (ASHRAE). Ideal refrigerants have favorable thermodynamic properties and are chemically inert (noncorrosive), environmentally friendly (degradable), and safe (nontoxic, nonflammable). The desired fluid should have a boiling point somewhat below the target temperature, a high heat of vaporization, moderate liquid density, high gas density, and a high critical temperature.

There are a number of specifications to consider when selecting compressors. These include capacity, condensing temperature, evaporating temperature, flow rate, and power.

Charts like this one are provided by the compressor's manufacturer, allowing engineers to make these adjustments properly once in the system: 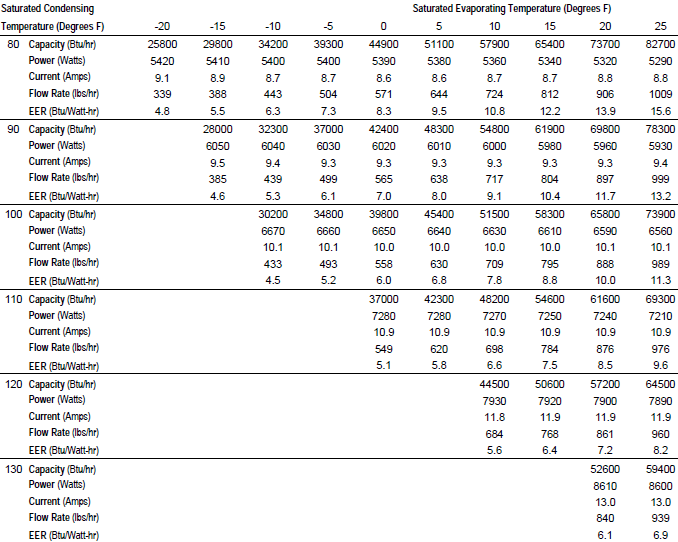 Refrigeration compressors and air conditioning compressors can incorporate a number of features which may be important for certain applications.

Standards related to refrigeration and air conditioning compressors include: