Wind turbines convert the kinetic energy from wind into mechanical energy. When used with an electrical generator, the rotation of the wind turbine’s blades turns a shaft to produce electricity. There are two basic types of wind turbines: horizontal-axis and vertical-axis. 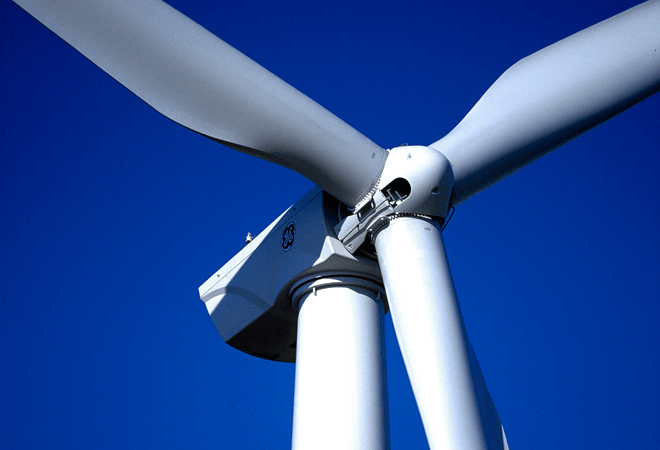 Horizontal-axis wind turbines (HAWT) have a two or three blade rotor that rotates about a horizontal axis. The rotor is predominant mounted upwind from the tower. The rotor is composed of a hub, wind turbine blades, and a spinner. The rotor can either be directly coupled to the generator, or use a drive train or gearbox to transfer the mechanical energy to the generator. A large aerodynamic enclosure, a nacelle, houses the drive train and generator. 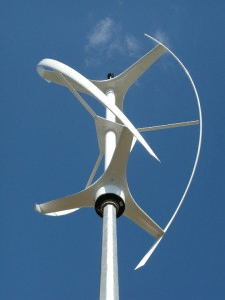 Vertical-axis wind turbines (VAWT) are low-noise, omni-directional wind turbines that use one or more propellers or airfoils that rotate about a vertical axis. Vertical turbines impose less physical stress on the support structure, offer a wide range of operating speeds, and offer easy access to the generator, which is located at the base of the turbine.

Aerodynamics is the study of the physical properties of air flow and the characteristic behavior of how solid objects interact with it. Aerodynamics describes the forces that drive a wind turbine, as well as depict theoretical phenomenon that define available power and maximum attainable efficiencies.

Lift and drag are two aerodynamic forces exerted on the blades of a wind turbine.

In 1919, German physicist Albert Bertz published a theorem that no open flow turbine can be more than 59.3% efficient in harnessing kinetic energy from wind. His theorem stated that for there to be airflow through the turbine some amount of kinetic energy must escape the blades of the turbine, thus only 59.3% could be harnessed due to principles of conservation of mass and momentum of the air stream.

In practical applications the efficiency of the wind turbines is even less than 59% due to non-laminar flow patterns, variable air densities, and turbulent flow regimes that propagate downwind. Some amount of airflow is actually deflected and never passes through the rotor swept area as the net combined effect of dampening forces causes wind speeds to diminish prior to reaching the blades of the wind turbine.

Wind power is proportional to the cube of wind velocity; therefore fluctuation in wind velocity exponentially impacts the available power. For this reason most wind turbines will not produce any power until the cut-in speed is breached, typically sustained winds of 5m/s. This relationship between wind speed and power also amplifies the importance of proper site selection. Wind turbines are designed to operate in a specific wind speed range. Areas prone to highly variable wind speeds do not prove to be an adequate site for wind turbines.

In order to provide a viable source of renewable energy wind turbines must be economical in that the power produced must be substantial enough to offset the upstream costs. Onshore and offshore solutions each carry their own pros and cons.

Offshore wind farms have the competitive advantage of favorable wind conditions, aesthetics, and minimal impact on migrating birds, which all come with increased upstream costs. 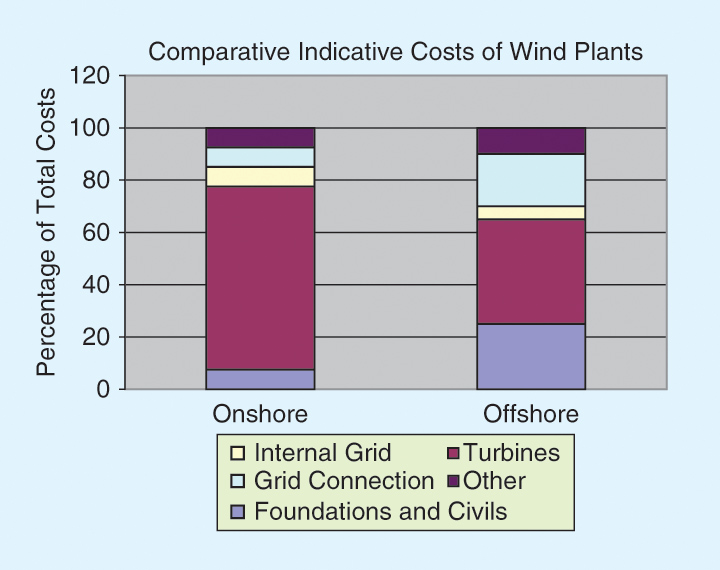 Wind turbines contain many parts. The anemometer tracks wind speeds and transfers measurements from the wind vane to the controller, a component which starts the turbine at wind speeds between 8 to 16 miles per hour and shuts off the turbine at about 65 mph. Gears connect the low-speed shaft to the high-speed shaft and increase the turbine's rotational speeds from about 30 to 60 rotations per minutes (rpm) to about 1200 to 1500 rpm. With upwind turbines, motor-powered yaw drives are used to keep the rotor facing the wind. Mechanical, electrical, or hydraulic disc brakes can be used to stop the rotor in the event of an emergency.

IEC standards encompass all electro-technologies, including electronics, magnetics and electromagnetics, electro-acoustics, multimedia, telecommunication, and energy production and distribution, in addition to related general disciplines such as terminology and symbols, electromagnetic compatibility, measurement and performance, dependability, design and development, safety, and the environment.

Energy From the Wind