Slide switches are mechanical switches using a slider that moves (slides) from the open (off) position to the closed (on) position. They allow control over current flow in a circuit without having to manually cut or splice wire. This type of switch is best used for controlling current flow in small projects.

There are two common internal designs of slide switches. The most common design uses metal slides that make contact with the flat metal parts on the switch. As the slider is moved it causes the metal slide contacts to slide from one set of metal contacts to the other, actuating the switch. The second design uses a metal seesaw. The slider has a spring that pushes down on one side of the metal seesaw or the other. 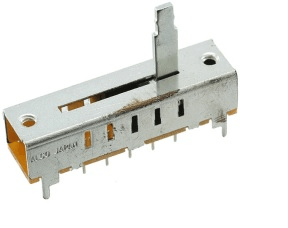 Most slide switches are of the SPDT variety. SPDT switches should have three terminals: one common pin and two pins which compete for connection to the common. They are best used for selecting between two power sources and swapping inputs.

Another common pole and throw configuration is DPDT. The common terminal is usually in the middle and the two select positions are on the outside.

Panel mount switches are designed to sit outside an enclosure to offer protection to the slide switch.

Maximum AC/DC voltage is the amount of voltage the switch can safely handle at one time.

Slide switches may have a variety of features that best fit the desired application.

Slide switches must adhere to standards such as BS CECC 96601, a detail specification for slide switches, MIL-S-83504/4, for single and double pole slide switches, and EIA-520EAAD, discussing raised and recessed slide actuated.