Fluxes are chemical agents used for cleaning, purification, and improving flow, and are common components of metal joining processes such as soldering, brazing, and welding.

When metal is heated to facilitate joining, oxides form on the metal surface, reducing solder's ability to join the base metal parts. Fluxes — compounds which are inert at room temperature but become strongly reducing when heated — are added to solder or applied directly to the metal parts to prevent oxidation. Within this use fluxes serve two main purposes: to dissolve the oxides on the base metal surface, and to act as an oxygen barrier by coating the surface to prevent further oxidation. Fluxes also reduce the part's surface tension and promote wetting of the surfaces to be joined. 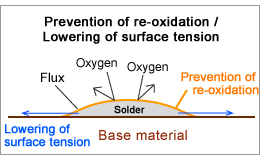 Fluxes can be organic or inorganic compounds, depending upon their intended application. While most organic fluxes are non-corrosive or weakly corrosive, some compositions — particularly acid-based types — are strongly corrosive and must be handled with extreme care. Other drawbacks of using flux include potential contamination of sensitive parts, deterioration of electrical properties, adverse health effects from fumes, and electromigration or growth of whiskers.

The video below shows the application of flux on electronic components; here the flux is used to clean and prepare the PCB surface for reball soldering.

Typically, organic fluxes consist of four major components. These are listed in the table below along with a brief description of their purpose.

Fluxes designed for specific applications must be capable of handling heat sufficient to join the metal parts. For example, because brazing requires higher temperatures than soldering, brazing fluxes must remain stable and provide oxidation protection at these high temperatures. The table below shows the effects of high temperatures on flux as well as maximum protection temperatures. 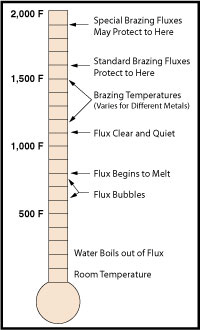 Fluxes are typically classified by their intended application, whether they are used for brazing, soldering, or welding.

Brazing fluxes are typically inorganic and are designed to withstand the high temperatures necessary for brazing operation. Many brazing fluxes contain some combination of borax (sodium borate) and ammonium chloride, especially for iron, steel, and tin. The chemicals used in brazing fluxes — including borates, flourides, chlorides, and fluoroborates — act as both vehicles and activators as described above. For lower temperature brazing of aluminum and magnesium alloys, halogenides are often used.

Soldering fluxes include both organic and inorganic compounds, of which rosin is the most common. Rosin is an organic solid obtained from pine trees and other conifer plants. Many lead-tin solders contain a rosin core to improve flow and reduce oxidation. The burnt or clear residue surrounding new soldering is actually rosin flux. Welding fluxes are typically powdered and use a variety of inorganic elements, including magnesium, silicon dioxide, and chromium.

Flux is available in different forms, including paste, liquid, and powder.

Of all standards relating to flux, J-STD-004, developed by IPC (Association Connecting Electronics Industries) is one of the most wide-reaching and comprehensive. J-STD-004 classifies fluxes by type, including rosin (RO), resin (RE), organic (OR), inorganic (IN), etc. It also establishes standards for flux composition, halide content, as well as material testing and inspection.

ISO 9454 is the most common European standard pertaining to flux and is published by the International Standards Organization (ISO). This standard established its own classification system based on a flux's composition; the system uses a four character (three numbers and a letter) code to describe products. For example, a flux classified as 1.2.2.B represents a resin-type flux with a rosin base and halide activators in a paste form.

Other flux standards include: