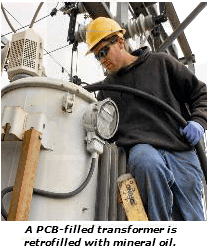 Dielectric greases and insulation fluids seal and lubricate the nonconductive mating surfaces of electrical connections. They have high resistivity, which mitigates arcing when an electrical current is present. Dielectric fluids must exhibit quality thermal stability and heat transfer, while also remaining noncorrosive. Combustion resistance and low toxicity are also beneficial properties, but some risk is often accepted in consideration of costs and application.

The fluid retains uniform resistance after a corona or arc, but extended breakdowns may create impurities and conductive pathways. Galvanic corrosion between electrical connections of dissimilar metals can be prevented with a dielectric grease between high pressure contacts, but will also weaken low pressure contacts. Certain oils may act as a solvent when in contact with system components, such as gaskets, o-rings, seals, or filters which contain reactive rubber or plastics. Various additives to most dielectric fluids can tailor utility to a specific application.

Mineral oil has been employed in power transformers for more than 100 years, and is valued for its low cost and reliability. It is petroleum-based and some fire risk is inherent. It is also quite toxic.

Mixtures of petroleum-based paraffinic hydrocarbons and chemical additives provide this fluid with good dielectric strength and oxidation stability, as well as a high fire point. It is biodegradable and non-toxic. The chemical additives improve viscosity in cold temperatures. They are sometimes employed as retrofills and top-offs for older equipment.

Applications which require maximum fire resistance use silicone-based dielectric fluids, which are also self-extinguishing. They are reliable and common for indoor transformers. At temperatures above 300° F silicone generates formaldehyde. Silicone oils are also expensive and a pollutant. They are not miscible with other types of dielectric fluids.

These are created by esterification between a tetra-alcohol and mono-caboxylic acids, and are composed of hydrogen, carbon, and oxygen. They are provided additives or fillers to meet end-use requirements, and therefore synthetic esters can be manufactured for nearly any application. These fluids often have a very low pour point and good oxidation stability, making them optimal for cold climates.

These are also known as plant or vegetable oils, and are formulated from plants such as soy beans, palm kernels, rapeseed, coconut, and sunflower. Natural esters are created by esterification between tri-alcohol and fatty acids, followed by the transesterification of mono- and tri-esters. These are common as retrofills in distribution transformers, but are uncommon in power transformers. Plant-based dielectric fluids are biodegradable and safe to handle. These plant oils cannot be chemically altered, and typically have a low pour point at the expense of poor oxidation stability, meaning they can only be used in sealed equipment. They have long service lives, and often extend the lives of transformers as well. However, the cost to implement plant-based ester dielectric fluids is high.

PCBs were heavily used in transformers for more than 20 years because of their chemical stability and non-flammable nature. However, they were identified as severe pollutants and carcinogens in the 1960s, and within a decade environmental legislation curtailed the production, importation, and usage of PCBs in many industrialized nations. PCB-filled transformers are still common today, but are refilled or replaced when the PCB-based dielectric fluid expires. PCBs may be sought as transformer fluids in less regulated markets.

Kerosene is occasionally used for EDM applications—especially in third-world manufacturing—because of its low cost, high availability, and low viscosity. However, it is disregarded because of its low flash point, high volatility, and agitative odors and skin reactions. It has been replaced by newer, synthetic dielectric fluids.

Many applications benefit from the inclusion of a liquid dielectric material. Fluid-filled and fluid-impregnated capacitors have been used in a variety of high-current and high-voltage applications, such as motor-run, motor-start, and power factor correction. They are also used in switchgear to quench arcs when contacts are disconnected.

Transformer oils are employed in some types of power transformers. The oil is often managed by radiators, filters, fans, pumps, or heat exchangers, and periodic testing is performed to determine when it needs to be replaced.  Mineral oils are most common, but synthetic ester and silicone-based dielectric fluids are also becoming popular. 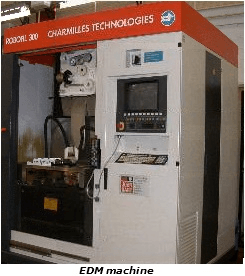 EDM is a metal forming process where fragments of the workpiece are eroded by recurring discharges between two electrodes. EDM fluids act as a semiconductor to create a stable spark gap ionization between the electrodes, while also rinsing debris away. The dielectric fluid has a specific voltage and amperage, but with repeated use the EDM fluid may degrade.

Petroleum-based EDM fluids are common and inexpensive, but have the shortest service life—on average about 5 years. Synthetic EDM fluids almost never degrade in dielectric strength, resulting in a long service life. They are less toxic to personnel, but are also more expensive. Plant-based EDM fluids are used exclusively in the medical industry, where equipment cannot be exposed to petroleum or synthetic types.

EDM fluid lifespan is determined by the type of fluid used, the type of EDM machining, substrate material, and the EDM fluid filter. A refractometer can determine the quality of used EDM fluid, and overstrained EDM fluids can smell or change color.

The following parameters should be considered when selecting a dielectric fluid. This list as by no means complete, as volatility, oxidation stability, and the hazard to personnel may also be important, depending upon the application.

Many of the values listed are generalizations of the fluid's characteristics, as they fluctuate across manufacturers. They do provide a basis for understanding each dielectric's abilities.

The standards listed below provide the test methods to evaluate a dielectric fluid.