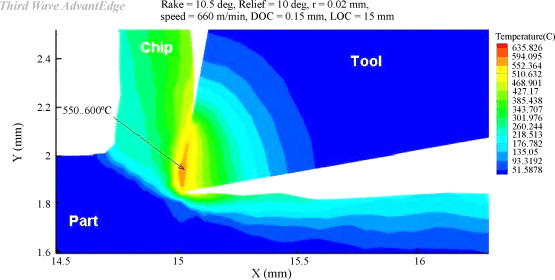 Thermal deformation is a phenomenon experienced in machining operations due to the combing effects of plastic strain and friction-induced heat at the tool and workpiece interface. The increased temperature gives rise to surface toughness, increased thermal error in precision machining operations, and decreased tool life. Cutting fluids counter these problems by lowering the coefficient of friction and transferring heat away via convection, thereby increasing the temperature gradient at the machining interface.

The following formula illustrates how heat is generated at the tool interface by friction:

Localized strain occurs when there is a break-down in the lubrication regime. Localized areas that experience undesired solid-to-solid contact experience a spike in friction. This may cause the material to undergo some amount of strain, damaging either the tool or workpiece. Metalworking fluids (MWFs) are carefully designed to effectively lubricate the workpiece by anticipating the temperature and pressure environment that they experience in a given metal forming operation.

Corrosion is a natural process where the surface of a substance, typically a metal, deteriorates due to a reaction that occurs within its environment. A corrosion inhibitor is added in small concentrations to the environment in order to control the rate or eliminate corrosion. In MWFs they are added to protect the untreated, exposed surface formed during the machining operation. To learn more about corrosion inhibitors please visit IHS's learn more page for rust preventives and corrosion inhibitors.

Metalworking lubricants, coolants, and fluids include various types of fluids used in metalworking operations that are illustrated by the following table:

Metalworking lubricants, coolants, and fluids vary widely in terms of chemical composition. They may be classified as being either petroleum or mineral oil-based, or synthetic or semi-synthetic. Petroleum and mineral oil products are functional fluids derived from petroleum. They include a broad range of hydrocarbon-based substances of varying chemical compositions and a wide variety of physical properties. Specific constituents present include aromatic, naphthenic, and paraffinic fluids.

Synthetic or semi-synthetic fluids include fluids with a base of glycol or polyglycol, ester or diester, or silicone-based fluids. They exhibit outstanding thermal and dielectric properties. The characteristics, cost, and heat transfer performance of semi-synthetic fluids fall between those of synthetic and soluble oil fluids.

ASTM D2881 - This classification covers and is designed to standardize and consolidate the terminology, nomenclature, and classification of metalworking fluids and related materials.

ASTM D6482 - This test method covers the equipment and the procedure for evaluation of quenching characteristics of a quenching fluid by cooling rate determination.

ASTM E2275 - This practice addresses the evaluation of the relative inherent bio-resistance of water-miscible metalworking fluids, the bio-resistance attributable to augmentation with antimicrobial pesticides, or both. It replaces Methods D3946 and E686.

A Tutorial on Cutting Fluids on Machining

Introduction to Heat in Machining