Pressure switches are actuated by a change in the pressure of a liquid or gas. They activate electromechanical or solid- state switches upon reaching a specific pressure level to open or close a system.

Number of Poles and Throws

Most switches have one or two poles and one or two throws, but some manufacturers will produce custom level switches for special applications. The number of poles describes the number of separate circuits which can pass through the switch at the same time. The number of throws describes the number of circuits each pole can control. This is noted by the configuration of the circuit (NO/NC). Breaks are interruptions in the circuit caused by the separated contacts the switch introduces into each circuit it opens.

Single Pole, Single Throw (SPST) - Single pole, single throw (SPST) switches make or break the connection of a single conductor in a single branch circuit. They usually have two terminals and are referred to as single-pole switches

Single Pole, Double Throw (SPDT) - Single pole, double throw (SPDT) switches make or break the connection of a single conductor with either one of the two other single conductors. They usually have three terminals and are commonly used in pairs. SPDT switches are sometimes called three-way switches.

Double Pole, Single Throw (DPST) - Double pole, single throw (DPST) switches make or break the connection of two circuit conductors in a single-branch circuit. They typically have six terminals and are available in both momentary and maintained contact versions.

Other- Other, special throw types with more than two poles. Examples include switches that are designed to split loads into separate circuits (e.g. headlamp switches). 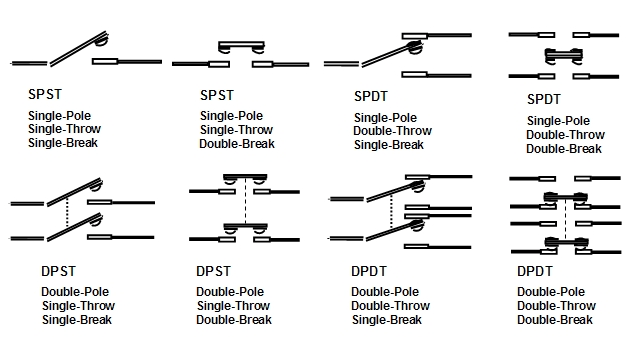 Other important parameters to consider include switch accuracy, the type of material to be measured, features such as temperature compensation and temperature output, and electrical output. Important operating parameters to consider include operating temperature, maximum shock, and maximum vibration. For more information on the parameters and features associated with pressure switches, read How to Select Pressure Sensors and How to Select Pressure Gauges.