Network bridges connect network segments so that devices on both segments can communicate as if they were part of the same network. The centralize network administration and are easier to configure than network routers, whic

h require IP addressing for each computer on each segment. Bridges create a single subnet for the entire network. They require packet forwarding, but can also create connections between different types of network media.

Bridging occurs at the data link layer of the open systems interconnection (OSI), a standard reference model for describing the transmission of messages between any two points in a network. Although they cannot read IP addresses, bridges can read the outermost hardware address of a packet. This hardware address or media access control (MAC) address s can be determined by either transparent bridging or source route bridging.

This diagram shows how a bridge is used to connect two network segments to each other. 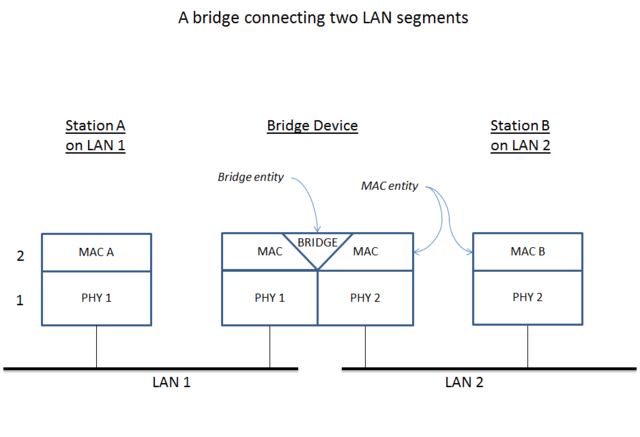 As with other types of network equipment, the Engineering360 SpecSearch database describes bridges as LAN, WAN or MAN capable. Products are also categorized by form factor: chip, board, or module. In addition, the bridge type is defined by whether the device is PoE ready, meaning that it supports Power over Ethernet (PoE) technology so that both data and power can be delivered over a single cable. PoE readiness is only available for Ethernet bridges, of course, but Engineering360 provides information about network bridges that use many other protocols (e.g., CANbus, DeviceNet).

When selecting network bridges, industrial buyers can specify the maximum data transfer speed, the number of users, the number of concurrent users (concurrent connections), and the total number of MAC address. With transparent bridging (described above), these hardware addresses are stored in a table.

Network bridges may be stackable and rack-mounted for use in computer rooms, or hardened to withstand extreme environments. Product features also include alarms and LED indicators for problem identification, integrated firewalls for security, and IP addressing for smarter routing. Bridges for wireless LANs are also available.