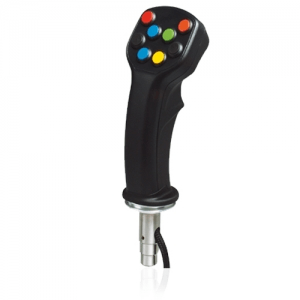 Industrial joysticks use potentiometric, inductive, or photoelectric sensing systems and/or switches to translate joystick motion into an output signal. They are usually made from plastic, nylon, nylon plastic, glass-filled nylon, or stainless steel. Several types of joystick controllers are available. Industrial joysticks are used in demanding environmental conditions or with heavy-duty equipment such as:

Specifications for joystick controllers include number of axes, friction hold, spring return, and protocol support. There are six degrees of freedom (DOF) corresponding to the axes of the direction of movement. The possible directions are x, y, z, yaw, pitch, and roll. Joystick controllers with between one and six axes are commonly available. Devices with friction-hold features latch the switching lever in the selected position. Spring return or centering returns the device to the center position due to mechanical or programmable spring force. In terms of protocol support, many types of connectors are available. Examples include universal serial bus (USB), CANbus, PROFIBUS, and pulse width modulation (PWM). DB-15 is game port connector on many older sound cards. RS232 is a standard serial interface between data terminal equipment and data communications equipment.

Industrial joysticks are used with several types of joysticks.

Inductive joysticks have a magnetic coil connected to the bottom of the grip shaft, directly over four other magnetic coils mounted on a circuit board in the base. Deflection moves the shaft-mounted magnetic coil over the four stationary coils, causing a change in the magnetic waveform patterns.

Resistive joysticks use potentiometers mounted to spring loaded bails that are moved by a deflection of the joystick handle. The outputs are read as either a change in voltage or a change in electrical resistance.

By contrast, optical joysticks use a non-contact photoelectronic switch instead of conventional contacting switches or potentiometers.

Some joysticks use microswitches, small switches that have a button that, when pressed, closes the switch. Others use non-contacting Hall Effect sensors or other input technologies.

Industrial joysticks vary in terms of handle options, mounting styles, and special features. Many joystick grips are straight or conical tubes, contoured to fit the hand, or shaped like a ball. Multifunction grips are usually actuated with a rocker switch, push-button, thumbwheel, or trigger. Some joysticks mount on a panel or desktop. Others are portable or part of an original equipment manufacturer (OEM) kit. Features for joystick controllers include bellows, gaiters, or boots; shielding from electromagnetic interference (EMI) and radio frequency interference (RFI); protection against electrostatic discharge (ESD); and temperature compensation. Force feedback provides tactile sensations via resistance, recoil, vibration, axis force, or vector force. Mechanical interlocks are switchable pins that are used to ensure that a plug cannot be engaged or disengaged under load.