Worms and worm gears are gear sets that offer high gear reduction and torque multiplication with a small footprint. A worm drive is a cylindrical gear with a shallow spiral thread that engages the worm gear in a non-intersecting, perpendicular axes configuration.

Efficiency of a worm drive is determined by the lead angle and the number of threads in contact with the worm gear. A high lead angle on the drive reduces frictional losses and heat. A low lead angle reduces gear speed while proportionally increasing torque.

Friction is an issue with all worm sets; the worm gear cannot transfer motion back to the worm drive in most instances. Lubrication and ground teeth both contribute to the sets' overall silence while minimizing friction. Worm gear sets are usually produced in pairs due to their precision.

Variance amongst worm gear sets is generally constricted to handedness (left or right) and the concavity available to worm drives and worm gears along gear widths. Their use depends on the mechanical efficiency required.

Gears mate via teeth with very specific geometry. Pitch is a measure of tooth spacing and is expressed in several ways.

Diametral pitch (DP) is the ratio of the number of teeth to the pitch diameter of a gear; a higher DP therefore indicates finer tooth spacing. It is easily calculated by the formula DP= (N+2) ÷ OD, where N is the number of teeth, and OD represents the circumferential measurement.

Circular pitch (CP) is a direct measurement of the distance from one tooth center to the adjacent tooth center. In a worm drive, it is called axial pitch and can be measured by the formula CP= Π ÷ DP.

Module (M) is a typical gear discipline and is a measurement of the size and teeth number of the gear. Gears measured in inches earn 'English module' distinction to prevent confusion. M = OD ÷ N

Pressure angle is the angle of tooth drive action, or the angle between the line of force between meshing teeth and the tangent to the pitch circle at the point of mesh. Typical pressure angles are 14.5° or 20°.

Lead angle is the angle at which the gear teeth are aligned compared to the axis. This is also the point of contact between the drive and the gear. This is also known as helix angle. 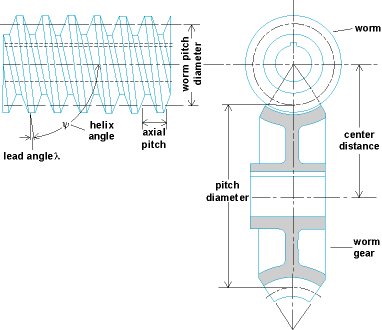 Selection tip: Worm drives and worm wheels must have the same pitch and pressure angle in order to mesh, but may not mesh if the envelope concavity is mismatched.

The mounting of worm gears is critical to their implementation. Multiple points of contact are necessary between the drive and gear so high work loads do not overwork the same lead angle, which could lead to gear failure. Enveloped worm gear sets are normally assembled in the same housing, to ensure proper mating and due to the sets' small footprint.

Consider the gear center, bore diameter and shaft diameter. The gear center can be a bored hole or an integral shaft. The bore diameter is the diameter of the center hole. The shaft diameter is the diameter of the shaft for gears with an integral shaft. Worms and worm gears can be mounted on a hub or shaft. A hub is a cylindrical projection on one or both sides of a worm or worm gear, often for the provision of a screw or other shaft attachment mechanism. Hubless gears are typically attached via press fit, adhesive or internal keyway.

Shaft mounting choices include the following:

Application requirements should be considered with the workload and environment of the gear set in mind.

Inertia of the gear through acceleration and deceleration. Heavier gears can be harder to stop or reverse.

Handedness (left or right teeth angles) depending the drive angle.

Gear lubrication requirements. Some gears require lubrication for smooth, temperate operation and this is especially true for worm drives, which may also employ ground teeth to reduce friction.

Corrosion resistance. Gears exposed to weather or chemicals should be especially hardened or protected.

Temperature exposure. Some gears may warp or become brittle in the face of extreme temperatures.

Vibration and shock resistance. Heavy machine loads or backlash, the deliberate surplus space in the circular pitch, may jostle gearing.

Operation disruption resistance. It may be necessary for some gear sets to function despite missing teeth or misalignment. If mounted correctly, most worm drives will operate if missing a tooth.

Worm gear sets are usually used to reduce speed and increase torque. Since the worm drive undergoes more contact stress cycles than the worm gear, the worm drive is usually of a stronger material.