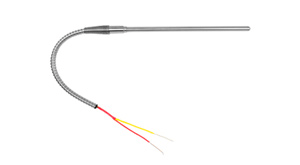 A thermoelectric circuit with a continuous current is established by joining the ends of two dissimilar wires and heating one of the junctions. An open circuit voltage, referred to as a Seebeck voltage, is observed if the circuit is broken at the center. The Seebeck voltage is the thermocouples sensor signal which correlates to the temperature differential.

The following chart show the conductors used, the Seebeck coefficient, and the operating temperature range for the most common thermocouple types:

Wire gauge is another important consideration when selecting thermocouple elements. The wire gauge represents the nominal diameter of the thermocouple wire. Thermocouples may be available in multiple or optional gauges. Gauge choices include the following: 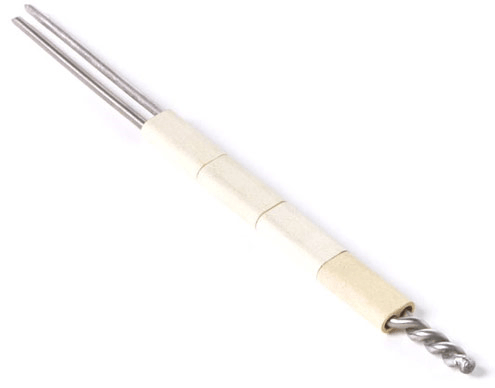 Sheathed thermocouple elements are available with one of three junction types, each with its own benefits and limitations.

Grounded elements are welded or joined to the sheathing. A grounded junction decreases the response time and is recommended for high-pressure applications, oxidizing environments, and most general applications.

Exposed elements have the fastest response time and remain isolated from the sheath material as the exposed junction extends beyond the sheath. Exposed junctions are sensitive to environmental conditions and may fail due to contact with liquids, contaminants, or other oxidizing agents.

Operating temperature is the full ambient temperature range over which there is a linear output without jeopardizing the materials of construction.

Response time is the required time for a sensor to reach 63.2% of a step change in temperature under normal operating conditions. Media flow rates, installation, and contact area can all affect the response time of the thermocouple element.

Accuracy is the difference between the sensors measurement and the absolute value of the parameter being measured, usually expressed as ±°C.

ASTM E2846 - This guide describes tests that may be applied to new or previously used thermocouples for the purpose of verification. Some of the tests perform a suitable verification by themselves, but many tests merely alert the user to serious problems if the thermocouple fails the test. Some of the tests examine inhomogeneity and others detect wire or measuring-junction breakage. For Style U mineral-insulated metal-sheathed (MIMS) thermocouples with ungrounded measuring junctions, this guide includes tests that examine the electrical isolation of the sheath as well as sheath deterioration.

ESDU 06018 - This is one of a series of data items concerned with temperature measurement providing background information and practical guidance on the design of temperature measuring systems using thermocouples.

How to Choose a Thermocouple