Electrical power generators, also known as alternators, transform mechanical energy into electrical energy. They can be used as backup for emergency power or as an alternator on board a vehicle. Generators can produce either AC or DC power and are typically powered by a fuel engine. 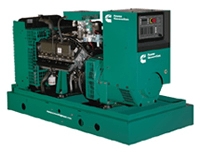 Generators produce electricity from mechanical inputs through the physical process of electromagnetic induction. In their simplest form, generators harness mechanical energy by rotating a coil through a magnetic field or electromagnets around a fixed coil in order to induce an electrical current.

Electromagnetic induction was discovered by Michael Faraday in 1830 and the physical process that produces an electromotive force (EMF) can best be explained by Faraday's Law of Electromagnetic Induction:

Rate of Change in Magnetic Flux

A generator is inversely analogous to an electric motor

Generators use conventional fuel sources such as gasoline, diesel, propane, and natural gas. Since each fuel source has unique thermal properties, each genset is primarily designed to consume a specific fuel source.

Diesel is a high octane fuel that is easy to refine while its shortcoming stems from the amount of pollutants it contains. Diesel generators boast high efficiency producing more energy on a normalized basis when compared to gasoline. Diesel fuel burns hotter, leaving fewer residues on internal combustion chambers, allowing for increased engine life as well. Recent developments to integrate an exhaust scrubber have impacted the efficiency of diesel generators while they still outperform other gensets in energy efficiency.

Gasoline is a lightweight, volatile conventional fuel that quickly evaporates. Gasoline generators have a lower heat of combustion and produce less energy on a volume normalized basis when compared to diesel generators. In most cases, gasoline generators are selected over diesel gensets due to lower air pollutants and fuel availability.

Propane and natural gas are considered environmentally friendly fuels. Most gensets that use propane or natural gas can be converted to burn either fuel, while some tri-fuel gensets are capable of being adjusted to burn gasoline as well. Propane is the energy efficient alternative while natural gas is a cheaper fuel source. Both fuels are used in lean-burn gensets that use a mixture of fuel and air in order to reduce nitric oxides (NOx) emissions and increase fuel efficiency.

Electrical power generators supply either a single or three phase AC voltage. This is the direct output from the alternator while voltage governors, frequency converters, and rectifiers are used to condition the output in order to supply a fixed voltage and frequency. The frequency of the AC voltage from the alternator is dependent on the rotational speed of the combustion engine and the number of magnetic poles. The following formula illustrates the relationship between the frequency, number of magnetic poles, and rotational speed of the alternator: 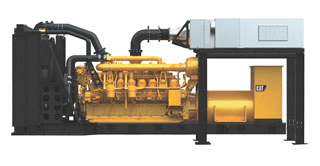 Electrical power generators contain a nominal power rating. An important specification includes AC prime power rating, which is expressed in volt-amperes (VA). For DC devices, an important specification includes DC power, which is expressed in watts (W). As a general principle, both AC and DC electrical power generators should not be operated at maximum power output for more than 30 minutes or for periods of time exceeding manufacturer recommendations.

Generators are designed for either permanent installation or packaged for ease of portability. Typically, portable gensets are smaller units while large units are mounted in a fixed location. Portable generators may be frame mounted, include an integral trailer, lifting hook, or otherwise include hardware that allows the unit to be transported. 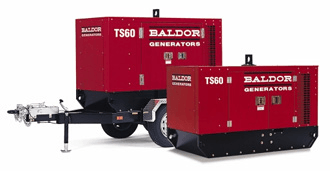 Industrial standards and regulations specify accepted practices for installation, operation, and maintenance of electrical power generators. Standards or regulations may be specific to government agencies (e.g., Department of Defense (DoD)), or may outline state and local codes that mandate specific requirements for industrial, commercial, and residential use (e.g. National Electrical Installation Standards (NEIS)).

U.S. Department of Defense (DoD). The U.S. Department of Defense (DOD) promotes standardization of material, facilities, and engineering practices for the purpose of improving military operational readiness, and reduce total ownership costs and acquisition cycle time. DOD standards state requirements in performance terms in order to make maximum use of non-government standards and commercial technologies, products, and practices. The Defense Standardization Program manages this process and provides a uniform series of specifications, standards, and related documents.