Dynamic seals retain or separate fluids, keep out contaminants, and contain pressure. They create a barrier between moving and stationary surfaces in rotary or linear applications such as rotating shafts and pistons. Dynamic seals fall into one of two categories, contact and clearance. Contact seals have the seal bear against its mating surface under positive pressure. Clearance seals operate with positive clearance, meaning there is no rubbing contact. The majority of dynamic seals are contact seals. The seal is separated by a thin layer of oil film, which also serves as a lubricant. The relative movement of the dynamic sealing system is rotary or reciprocating. Rotary motion is the movement of the shaft relative to its housing or stationary component and reciprocating movement is linear motion of a rod or piston in a cylinder.

Industrial buyers specify dynamic seals based on type, sealing orientation, dimensions, application, and material. Additional criteria to consider when selecting a dynamic seal for an application include: 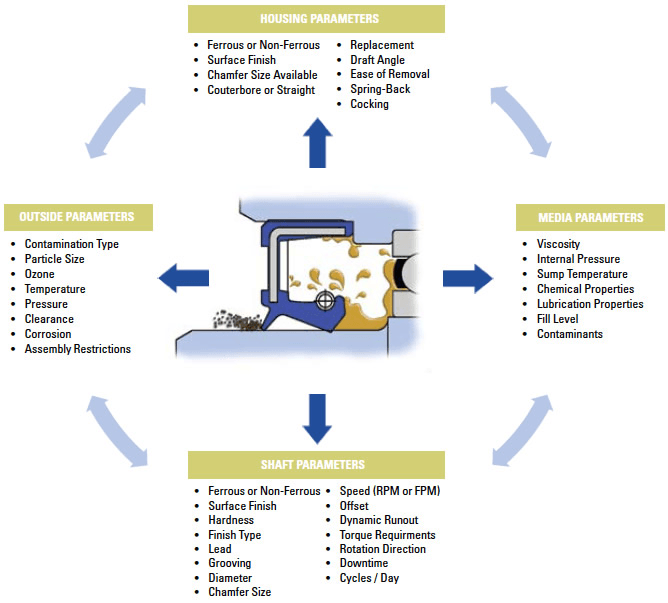 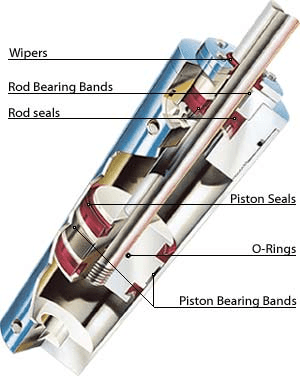 Oil and Grease Seals - Oil and grease seals have a flexible lip that rubs against a shaft or housing to prevent the leakage of fluids. Some oil and grease seals include a spring to help keep the lip in contact with the shaft. The seal helps to prevent lubricant from escaping and harmful contaminants from entering the machine. They are a critical component in almost every type of machine and vehicle.

Hydraulic and Pneumatic Seals -Hydraulic and pneumatic seals are designed for devices that provide reciprocating motion. They can be used in high pressure, dynamic applications to restrict the leakage of fluid and the entry of foreign materials. Hydraulic seals are important in converting fluid power to linear motion. Pneumatic seals have a similar design but typically operate in air or other gaseous mediums. This category includes piston seals, rod seals, U-cups, and flange packages.

Piston ring - Piston rings are metallic piston rings used to seal cylinders. They have a higher working temperature than elastomeric, fabric, or polymer materials. Piston rings are available in a variety of configurations, including compression rings, split rings, and cord rings.

Exclusion seals - Exclusion seals are dynamic seals such as wipers and scrapers that support sliding or reciprocating motion. They clean the surface by scraping abrasive particles such as dirt, mud, and ice. Exclusion seals are very important because they protect the seal and extend its service life. The wipers should be checked frequently to ensure they are in good working condition. Often the wipers fail causing the seal to fail.

Clearance or labyrinth seals - Clearance or labyrinth seals provide positive clearance and do not rub against the shaft or housing. Labyrinth seals restrict passage of solid, liquid, and gaseous contaminants into the area using a network of passageways. These seals also prevent leakage of fluid out of the sealed containment. Many clearance seals consist of a rotor and a stator. For proper sealing, the radial gap between these members must exceed the clearance of the bearing being sealed. Labyrinth seals will not damage the shaft because it is frictionless. They can also be used in extreme temperatures and high shaft rotating speeds without affecting their life expectancy. Clearance seals, which do not perform well at low operating speeds, include laminar products that contain a series of flat metal washer-like rings of varying diameters.

The following table is adapted from the Seals and Sealing Handbook, and shows several of the most common seal types.

Symmetric seals are suitable substitutes for both internal rod seal and external piston seals. They work equally well with piston and rod seals.

Axial seals are used with housing or machine components. Axial seals in the same direction as the axis of rotation, as opposed to radial seals, which seal perpendicular to this axis.

Design tip: For proper sealing, the seal lip on a dynamic seal needs to point towards the medium being contained.

Dynamic seals are influenced by several factors in their service life. The effect of these factors should be considered when selecting a seal.

Maximum operating speed - The speed or velocity of the media in the system can affect the performance and service life of the seal. The seal sits on a film of lubricant between the seal lip and the moving surface. The amount of friction depends on the thickness of the lubricating film. The film is squeezed to its minimum thickness when there is no movement, as an increase in velocity causes more lubricant to be drawn between the seal the the moving surface, friction of the system decreases. Maximum operating speed is generally given as ft/min or m/sec. Past the maximum operating speed, the frictional force rises and the seal will begin to wear.

Maximum operating pressure - This is the maximum pressure that the seal is rated for without failure. If the pressure is too high the seal will be forced into the gap which exists between tolerance machined parts at the non-pressure side of the seal. The seal will begin to extrude causing premature failing. Anti-extrusion rings are available which minimize extrusion and maintain reasonable machining tolerances.

Vacuum Rated - The seal can operate in a vacuum.

Seals can be made of rubber or polymer, metals, or other materials including felt, and leather.

Metals - Metallic seals are made of sintered bronze, cast iron, or stainless steel. Sintered bronze is not suitable for heavily loaded applications, but useful when lubrication is inconvenient. Cast iron is a family of materials made mainly of iron, but with important trace amounts of carbon and silicon. Stainless steel is chemical and corrosion resistant and can have relatively high-pressure ratings.

How to Protect Bearings from the Elements (Machinery Lubrication)