Combustion engines are classified initially based on how they combust fuel (either internally or externally). Within each category, there are a number of different types of designs.

Two stroke engines complete the power cycle with two strokes of the piston within the cylinder, or one turn of the crankshaft. In these engines, the flow of the intake and the exhaust happen simultaneously.

Often two stroke engines are labeled as simpler in design and have a higher power-to-weight ratios than four stroke engines. They also are considered to be less fuel efficient and more polluting. However, there are many exceptions to these generalizations, and performance varies greatly with different engine designs. Two stroke engines are used to generate power in a variety of applications, including small landscaping products (e.g. chainsaws, trimmers), power plant operations, and large ships.

Four stroke engines complete the power cycle with four strokes of the piston within the cylinder, or two turns of the crankshaft. In these engines, individual phases are separated, and intake and exhaust happen separately during the power cycle. 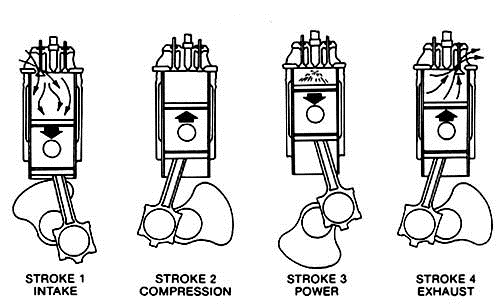 Four stroke engines are often more fuel efficient and cleaner than equivalent two stroke designs, but may be heavier and more complex to design. They are the most common type of internal combustion engine, used in applications ranging from automobiles to industrial machinery.

Selection Tip: Theoretically, a two stroke engine can generate twice as much power as a four stroke engine for the same engine and the same number of revolutions. In reality, this is only nearly true for very large systems, where the power ratio is about 1.8:1. The average two stroke engine suffers power losses from a less complete intake and exhaust and shorter effective compression and power stroke, making the power output nearly equivalent.

Rotary (Wankel) engines operate using a rotor and shaft instead of a piston. The rotation of the shaft moves a three sided rotor which drives the movement of fuel through the system. In these engines, the different phases (intake, compression, power, and exhaust) take place in separate locations in the engine. The driveshaft rotates once for every time the engine fires in the Wankel design.

Wankel engines are often lighter and simpler in design than equivalent piston engines. They are also typically more reliable (due to the reduction of moving parts) and have higher power-to-weight ratios. However, they suffer from less effective sealing which reduces their efficiency and lifespan. These engines are used mainly in racecars and sporting vehicles where reliability and lightness are considered more important than efficiency and engine life.

Turbine engines are internal combustion engines where the products of combustion are directed in a turbine inside the engine. The gas flow spins the blades of a turbine which generates power or does other mechanical work. They are smaller than most equivalent reciprocating engines and have very high power-to-weight ratios. They also have fewer moving parts, generate less vibration, and dissipate significant waste heat in the exhaust which can be used for other heating applications. However, they also have costs, longer startup times, and lower efficiencies when idling. They are used most commonly to power naval vessels.

Jet engines are a subset of turbine engines that are optimized to produce thrust. To do work, hot gases generated by the combustion source are propelled through a nozzle at high speed. They are used as propulsion systems for aircraft.

Stirling engines are single-phase external combustion engines which use air, helium, or hydrogen as the working fluid. Every Stirling engine has a sealed cylinder with one part hot and the other cold. The working gas inside the engine is moved by a mechanism from the hot side to the cold side. When the gas is on the hot side, it expands and pushes up on a piston. When it moves back to the cold side it contracts. Properly designed Stirling engines have two power pulses per revolution, which can make them very smooth running. Stirling engines can reach much higher efficiencies than typical internal combustion engines, and produce less noise and vibration during operation. However, they cannot start running instantly like IC engines, which makes them less useful for applications such as vehicles and aircraft. They are most commonly used for heating, cooling, and underwater power systems.

Steam engines are two-phase external engines which use water (in liquid and vapor forms) as the working fluid. Steam engines can also use non-combustion heat sources such as solar power, nuclear power, or geothermal energy to heat the steam. Modern steam engines are used primarily in the form of turbines for generating electric power. Combustion engines also vary based on the type of fuel they burn.

Other fuels that can be used to power certain types of engines include vegetable oil, hydrogen, butane, and wood (via gasification).

Selection Tip: It is important to check the standards that the manufacturer uses to base its torque measurement. Advertised ratings not based on certain standards may be deceiving and not accurate.

hp is the horsepower

τ is the torque in ft-lb

rpm is the speed in rpm

5252 is the unit conversion factor.

Here is a simplified example of what torque and power curves will look like for a small IC engine:

The power and torque increase with engine speed and reach a peak as physical limitations begin to take effect. These limitations include the intake and exhaust path size/shape, fuel mixing efficiency, flame propagation rate, friction, and mechanical component strength. There are a number of parameters that define different engine requirements which need to be considered during selection.

Combustion engines are designed with a number of different features which may be important to consider in the selection process.