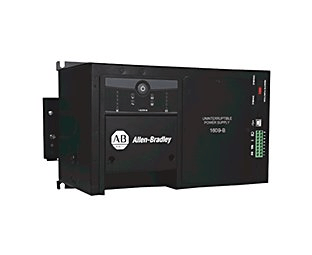 Uninterruptible power supplies (UPS) are backup batteries that provide emergency power to electrical systems in case power becomes unavailable. They are connected between a power source (such as an electrical outlet) and the equipment to protect (such as a motor or computer).

As their name suggests, three-phase UPSs operate in conjunction with existing electrical systems to provide power conditioning, back-up protection, and power distribution for loads that use three-phase power.

There are three basic types of three-phase UPSs: on-line or double-conversion, line-interactive, and off-line or standby.

On-line or double-conversion - The load is supplied from a continuously-operating power converter that receives its input from a DC supply. This DC supply consists of a battery and a large battery charger, which are connected in parallel.

Line-interactive - The inverter works in parallel with conditioned-input AC power to supply power to the load (boosting or bucking), and only handles the full load power when the AC input power fails.

Off-line - The power is usually derived directly from the power line, until power fails. After power failure, a battery-powered inverter turns on to continue supplying power.

The volt-amp (VA) rating is the maximum of volts multiplied by the number of amperes (amps) that the UPS can deliver. Note that the VA rating is not the same as the equipment’s power drain, which is measured in watts (W).

The watt rating, which is less than or equal to the VA rating, is specified only if the number of volt-amps is unknown.

The input voltage range, the precise identification of the electrical system, is critical to the proper selection of both single-phase and three-phase UPSs.