Show all Board Cameras Manufacturers 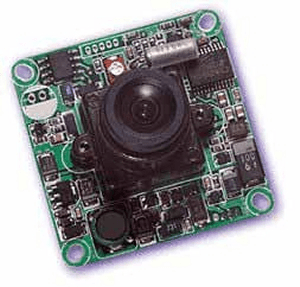 Board cameras, also commonly called printed circuit board (PCB) cameras, are a type of small-footprint video camera that are valued for their general versatility. With optical devices and image sensors mounted directly on a circuit board, manufacturers are able to sacrifice components to provide a space-saving design. Cellular phones and surveillance systems are the most prominent employers of board cameras.

Board cameras are a type of digital camera that have their optical recording devices--aperture, lens, and image sensor--directly attached to a printed circuit board with typical input/output. As such, most board cameras are small in size—registering just 1/3" in lens diameter. CCD image sensors are most common, but CMOS and CID sensors are used as well. Without a specified feature, board cameras retain the functionality of video cameras in general. It is recommended you visit Engineering360's video camera selection guide for an in-depth look at the capabilities of board cameras.

The display of a board camera is relayed through the I/O of the PCB, typically a display or handheld monitor. Since there are no analog controls, recording options are also controlled through this interface. Attached to a programmable logic controller, board cameras can act as a type of vision system.

Camera lenses have the greatest influence on the quality of image capture. Because of the small stature of PCB cameras, simple pinhole designs are available. Board cameras also utilize exclusive lens types.

Resolution of board cameras is typically rather poor when compared with other larger cameras. A horizontal resolution of 700 TVL is considered exceptional, while more moderately-priced yet capable cameras have resolutions between 380—480 TVL.

By using a digital image sensor, board cameras do not have a shutter in the photogenic film sense of the word, but rather use an electronic shutter that ensures the image sensor records a unified picture. In pinhole cameras, there is one preassigned exposure rate since the aperture cannot be changed. Auto-exposure is often utilized in board cameras.

Recognizable by the quality of the picture in low-light situations, sensitivity is measured in lux. Black and white board cameras are much more sensitive than their color counterparts, and some monochrome board cameras are capable of recording in environments with as little as .0003 lux which is helpful in surveillance applications. Color board cameras require more illumination to record a quality image. Minimum lux levels for elite-level color board cameras tend to be .3 lux.

Most board cameras provide a video feed via 75 Ohms composite output, but other options do exist. With an integral power supply, some board cameras can wireless transmit feeds. Firewire and USB connectivity is common when a memory is connected to the circuit board.

Board cameras are an inexpensive way to incorporate video cameras into existing devices or to position a camera with limited mounting options. Their small stature makes them exceptionally versatile, and they will meet the video recording requirements of many industrial applications. Common examples of board cameras include hidden cameras and surveillance modules. Board cameras are also prevalent in cellular phones and other mobile devices like iPods and tablet computers.

Pacific Board Cameras - Overview of Board PCB Cameras Available