Chart recorders and strip charts are data acquisition tools used to generate a plot, graph, or other visualization of data versus time. Common applications include temperature and humidity measurements, chromatography, spectroscopy graphs, and plots of the output of a wide range of other lab and test equipment.

Traditionally, chart recorders generated a hard copy. The function of the device is to generate a graph, plot, chart, or series of data points versus time for record keeping and analysis. In some applications a hard copy output is still desired. However, paperless or video graphing recorders and data loggers have taken a competitive advantage, as they do not require ink, pens, paper stock, or other consumables. To learn more about consumables for paper-based chart recorders please visit Engineering360's, Chart Recording Paper and Consumables specification guide.

Chart recorders monitor processes and systems by recording data points over a timed interval. They are customized for a particular application and may require specific modules in order to accommodate the type or number of inputs used. They may also be equipped with on-board memory, removable storage, or may interface with a computer used to process, store, and visualize the data. Some chart recorders are equipped with a switched output used to trigger an alarm or activate a switch when a pre-set condition is met or exceeded.

Analog signals are a wave signal which means that the value changes steadily over time and can have any value in a range. Products with analog inputs can have multiple channels. Channels are either single-end or differential.

Single-end inputs have only one low wire shared by all inputs. For example a board could have 2 single-end inputs; there will be two input lines and one ground line. Single-end inputs are less expensive and allow for twice the number of inputs in the same size wiring connector since they only require one analog input and one ground input which is shared by all the inputs. They save space and are easier to install. When single-ended outputs are available, suppliers often specify the maximum number of analog channel outputs as twice the number of differential outputs.

Differential channels have two inputs. The voltage is the signal processed between the two inputs. The board will have one signal and one ground pin for each input to allow for measurement voltage difference between two signals tied to the same ground. Differential channels provide excellent common-mode noise rejection. This type of input should be used when EMI, RFI or noise is present. 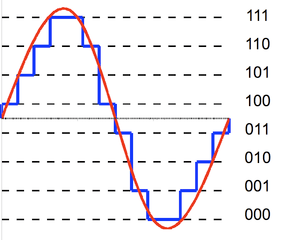 Accuracy is defined as the difference (error) between the true value and the indication expressed as percent of the span. Accuracy, which is represented as a percentage of a full-scale measurement range, depends on signal conditioning linearity, hysteresis, and temperature considerations. It includes the combined effects of method, observer, apparatus and environment.

Static accuracy is the combined effects of linearity, hysteresis, and repeatability. It is expressed as +/- percentage of full scale output. The static error band is a good measure of the accuracy that can be expected at constant temperature.

Repeatability is the ability of a transducer to reproduce output readings when the same pressure is applied to the transducer repeatedly, under the same conditions and in the same direction.

Sensor inputs can be accelerometer, thermocouple, thermistor, RTD, strain gauge or bridge, and LVDT or RVDT. Specialized inputs include encoder, counter or tachometer, timer or clock, relay or switch, and others.

Sensors can be classified as either active or passive devices. Passive devices like thermocouples can generate a signal without a power supply. Active sensors need a power supply in order to control the flow of electrons and make a measurement. In some cases active sensors are powered by the signal conditioner. The output from the signal conditioner that powers the device is referred to as an excitation source. Signal excitation can either be a voltage or current output. The following schematic showcases how an excitation voltage powers a Wheatstone bridge: