Show all Scales and Balances Manufacturers

Scales and balances are instruments which reflect an object's mass — it's matter independent of gravity, often represented by grams, kilograms, or pounds (mass); or its weight — the object's mass multiplied by gravitational acceleration (W=mg), which is best represented by ounces, pounds (force), tons, or Newtons. Scales are used to quantify the weight of items, be it for commercial, scientific, or investigative purposes. As such, scales are relied upon in nearly every industry to provide measurements ranging from micrograms to megagrams, or ounces to tons.

Balances were common in prehistory to determine relative weights rather than absolute weight. The most common type of balance relies upon a horizontal lever of equal arm lengths which pivot around a minimal-friction fulcrum. Balances with off-center fulcrums are available, but require adjustable reference masses and are more difficult to check for accuracy. Balances remain an effective means of precision weighing as they are not subject to variables which may cause a misreading on a scale (temperature, local gravity, etc.). In fact, center beam balances are still frequently used to calibrate the reference masses used to adjust scales.

Scales, devices which provide a weight measurement without contrasting it to another object, were uncommon until the mid-1800s when postal workers utilized spring scales to speed package handling. Until the technological advances of World War II scales often suffered from inaccuracy, and not until decades later had scales developed to the point of widespread use.

The most common type of mechanism utilized by mechanical scales and balances is the spring. The item to be weighed is either suspended from an extension spring, or placed on top of a compression spring. Spring scales require a spring with a known-constant based upon Hooke's law. The degree of deflection is indicative of the weight of the item, and some scales use a rack and pinion mechanism to translate this deflection into a dial reading.

Other mechanical scales rely upon a pendulum and fluid mechanics to determine weight. Pendulum balances supply a platform or hook attached to a fulcrum. Opposite the platform is a weighted, pointed indicator. When an object is weighed the indicator rises until the load is balanced. Hydraulic/pneumatic scales depend upon the predictive characteristics of compressed fluids. A load depresses a piston and the compressed fluid is fed into a Bourdon tube analog gauge or is registered by an electronic sensor. Fluid-based scales are common on cranes and other heavy lifting equipment.

The most common type of electronic scale is the digital scale. Digital scales are supplied with a load cell; this device supplies the measurement, and turns the mechanical energy into an electrical effect. As the load cell compresses under burden, so does the attached strain gauge, which is an insulated, flexible metal foil pattern (commonly made of constantan alloy). As the strain gauge's geometry changes, so does its electrical resistance. This change in resistance is measured by a Wheatstone bridge, and the scale provides a proportional readout based upon the change in resistance. Frequently, light loads require amplification for accuracy. Occasionally, spring scales utilize a strain gauge as well, as depicted in the image below. 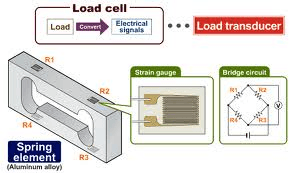 Scales express accuracy as a percentage of the overall scale capacity. This percentage provides a tolerance of what can be expected from a calibrated scale. For industrial and scientific applications, the precision of a scale should be considered as well. Many scales allocate measurements by separating a burden, regardless of weight, into divisions of 100—100,000. For example, a 20,000 kg scale may be manufactured to calculate weight in divisions of 5,000, and therefore it would display a weight in intervals of 4 kg; this is also known as resolution. Using these considerations, scales are separated into scale classes. The precision of a scale's resolution often correlates with the cost of the scale. 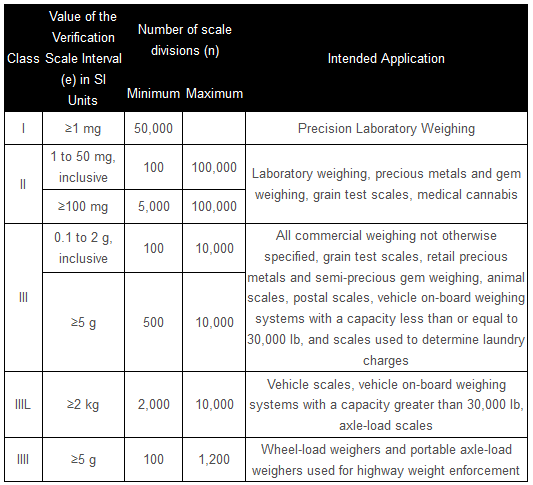 For this reason, considering a scale capacity that is just above the heaviest expected burden assures operators of the most accurate readings. Scales are also judged on their accuracy with two principles of operation. Repeatability is the scale's potential to show consistent results under the same conditions. Re-producibility is a scale's ability to show consistent measurements under changed conditions.

Other mechanical and environment variables may cause misreadings. Though they may be inconsequential for heavy loads, scientific scales can have severely incorrect readings as a result of any of the following.

Calibration is the sequence of operations to determine the discrepancy between a known reference and the amount by which the scale misrepresents that weight. One of the most common methods of determining miscalibration is with a linearity test; several reference masses weighed together should weigh the same as when those weights are measured individually and summed.

The process of reconfiguring the scale to be within tolerable accuracy is known as adjustment. If the adjustment is completed by a calibration technician, a calibration certificate may be authorized to assure users of the scale's accuracy. Such certificate can only be obtained when the scale has been adjusted at its installation site. Such certificate also has a traceable and definable record, and may be required for some industries. For commercial and scientific functions, the adjustment of a scale is best handled by Calibration and Repair Services, and scale calibration is recommended at least once a year.

Scales are frequently adjusted by the use of levers, screws, or an operator interface. For non-commercial and non-scientific uses, infrequent testing of a scale using informal known references (dumbbells, household items, etc.) will typically suffice in calibrating a scale. When calibrating and adjusting tractor trailer scales, a test truck with a weight cart is utilized as depicted in the video below.

The overall footprint of the scale is often considered to assure that it is well-accommodated by its workspace. A minimal clearance zone should be kept around the scale to ease loading and unloading. Scales come in varying magnitudes, and size is often relative to scale capacity.

Benchtop/countertop scales are designed to be positioned on elevated, flat surfaces. They typically weigh objects which can be maneuvered by the operators hand.

Suspended scales feature a weighing platform hung from the calculating device. These scales can be used for many objects and a range of burdens, but carry some peril if the device is overloaded or malfunctions, or if the operator is negligent. However, suspended scales can save valuable floor/bench space.

Integrated scales have a specific form factor for assimilating the scale into other devices, such as conveyor systems, vehicles suspensions, or material handling vehicles.

Floor scales are meant to be installed on the flat, finished floors of a factory, workshop, or retail business. Floor scales are often large devices capable of accurately calculating thousands of pounds.

Vehicle scales are commonplace on roadsides and in railways. These scales determine the cargo weight of trailers and boxcars to ensure legislative compliance and mechanical efficiency. Their load capacity is often measured in tens of tons, and can have a weighing area of hundreds of square feet.

The load bearing platform of the scale must effectively support the dimensions of the object to be weighed. An object on the scale does not necessarily have to be at rest, but its entire weight should be concentrated on the platform. Using a platform with a smaller surface area than the length of the object is often acceptable provided the load is balanced and stable. Expansion trays and tare containers can be useful for measuring large or bulk items. Roadway vehicle scales typically require the vehicle to be positioned on skids or a weighbridge, and railway cars are loaded onto rails integrated to the track gauge. Vehicle scales are frequently capable of in-motion weighing.

The maximum load weight a scale can withstand before plastic deformation occurs.

A scale will provide either an analog or digital representation of measured weight. It may be necessary to provide a numeric output away from the vicinity of the scale itself, so models with a remote display or remote add-on are available.

Types of Scales and Balances

One of the most important certifications is by NTEP, which is a program run by the National Conference on Weights and Measures to certify that all scales utilized in commerce meet acceptable tolerances. A compliance certificate is bestowed upon any device which meets NTEP approval, and the conference keeps an updated database of conforming devices.

Many scientific and commercial scales are IP Code-rated as well. The Ingress Protection Code provides certification that an electronic device is invulnerable to certain degrees of dust, water, and mechanical intrusion. The code is represented by a two-digit numeral; the former digit indicates the degree of dust resistance, while the latter digit represents its endurance against liquids. An alphabetic character may follow the numeral for various amendments. 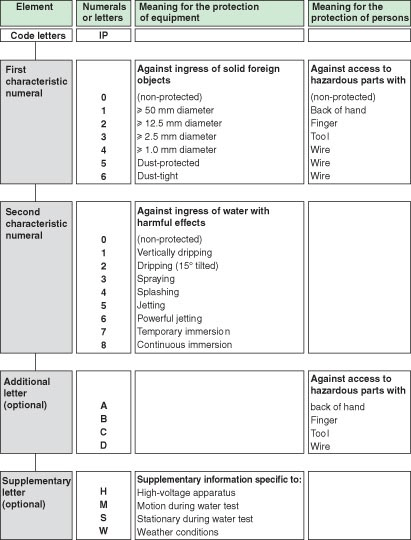 Similarly, scales that rely on an enclosure for protection -- in non-hazardous outdoor and indoor installations -- are frequently subject to NEMA standard 205.

A variety of industrial standards also regard the installation and application of scales and balances.