Microscopes are instruments that produce a magnified image of a small object. They are used in many scientific and industrial applications. Some common applications for microscopes include manufacturing inspection and high-technology quality control.

Microscopes are supplied in one of three common configurations, student, benchtop, and research.

Student - Student microscopes are the smallest and least expensive type of microscope. They are capable of advanced techniques and documentation even though they are for student use. They are designed for bright field, dark field, and phase contrast.

Research - Research microscopes are large, weighing in the range of 30Kg to 50 Kg. This mass is composed of complex optical, mechanical, and electronic systems. They may use multiple cameras, large specimens, and the widest range of simultaneous techniques. Many will have built-in computers to control the cameras and other functions including focus or image processing. Acoustic and ultrasonic microscopes use sound waves to create images of the sample.

An inverted microscope locates the illumination system above the stage and the lens system below the stage.

A confocal microscope or laser microscope uses a laser-to-light image one plane of a specimen at a time.

Portable field microscopes are designed for use outside of a laboratory setting. They have a portable energy source, or it may use natural light for illumination. In electron microscopes the image is formed by a detector which is synchronized with a focused electron beam that scans the object. The intensity of the image-forming beam is proportional to the back-scattered or secondary emission of the specimen where the probe strikes it.

Magnification of electron microscopes is controlled by the length or area scanned.

Atomic force microscopes enable the user to image the topography of a sample and monitor ultrasonic surface vibrations in the MHz range. A part of the position-sensing light beam reflected from the cantilever is directed to an external knife-edge detector to detect the distribution of the ultrasonic vibration amplitude.

Transmission electron microscopes or TEM microscopes pass image-forming rays through the specimen being observed. Contrast or diffracted beam images are used to analyze the sample.

Important parameters to consider when specifying microscopes include total magnification and resolution.

Total magnification - A ratio of the size of an image to its corresponding object. This is usually determined by linear measurement. This specification is meant to represent the entire magnification range of a microscope including both the eyepiece magnification and the objective magnification. Search Logic: User may specify either, both, or neither of the "At Least" and "No More Than" values. Products returned as matches will meet all specified criteria.

Resolution - An optical device reveals the fineness of detail in an object. Objectively, resolution is specified as the minimum distance between two lines or points in the object that are perceived as separate by the human eye. Subjectively, the images of the two resolved points must fall on two receptors (rods or cones), which are separated by at least one other receptor on the retina of the eye.

Microscopes can come in one of many types of eyepiece styles. These include monocular, binocular, trinocular or dual head.

Monocular - A microscope with one objective and one body tube for monocular vision. 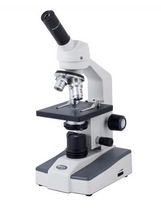 Binocular - A microscope fitted with double eyepieces for vision with both eyes. The purpose in dividing the same image from a single objective of the usual compound microscope is to reduce eyestrain and muscular fatigue, which may result from monocular, high-power microscopy. These types of microscopes are also used for stereoscopic vision, which allows for depth perception of the sample.

Dual head - A dual head has one vertical eyepiece lens and a second eyepiece off the side at 45 degrees (So that two people can view the sample at one time, or one person and a camera).

Trinocular - A microscope with a vertical tube at the top and regular binocular eyepieces at 30 degrees. The vertical tube is often used for a digital camera or a second observer. 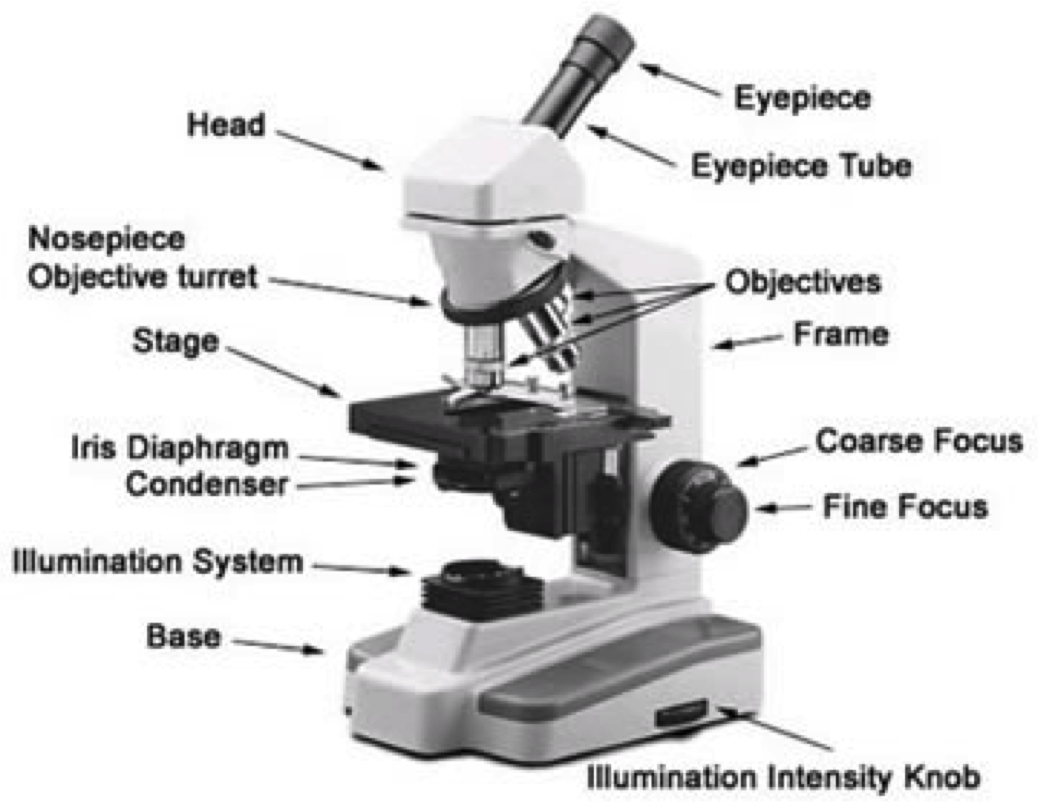 Microscopes must adhere to specific standards and guidlines to ensure proper design and functionality. A selections of standards is listed below:

A-A-50207: The General Services Administration has authorized the use of this commercial item description in preference to military specification MIL-M-52391. This description covers a pocket-type microscope with an optical system of between 40X and 60X magnification intended for use in the inspection of scribed lines made on scribed, coated plastic sheets in the color-separation drafting phase of military cartography.\

ASTM E210: This standard covers the screw thread used for mounting the objective assembly to the body or lens turret of microscopes. It is based on, and intended to be interchangeable with, the screw thread introduced and adopted many years ago by the Royal Microscopical Society of Great Britain, generally known as the "RMS thread" and now almost universally accepted as the basic standard for microscope objective mountings. Formal recognition, however, has been extremely limited. The values stated in inch-pound units are to be regarded as standard. No other units of measurement are included in this standard.

ASTM E986: This practice provides a reproducible means by which one aspect of the performance of a scanning electron microscope (SEM) may be characterized. The resolution of an SEM depends on many factors, some of which are electron beam voltage and current, lens aberrations, contrast in the specimen, and operator-instrument-material interaction. However, the resolution for any set of conditions is limited by the size of the electron beam. This size can be quantified through the measurement of an effective apparent edge sharpness for a number of materials, two of which are suggested. This practice requires an SEM with the capability to perform line-scan traces, for example, Y-deflection waveform generation, for the suggested materials. The range of SEM magnification at which this practice is of utility is from 1000 to 50 000 X . Higher magnifications may be attempted, but difficulty in making precise measurements can be expected.