Evaporators convert materials from a liquid to a gaseous state. They consist of a heat exchanger or bath, valves, manifolds, and temperature controls. Evaporators vary in terms evaporation rate, system capacity, and feed tank capacity. Laboratory-scale devices are designed to handle small batches of material. By contrast, production-scale devices are recommended for commercial operations. Often, pilot scale devices are suitable for intermediate-range operations.

Power sources for evaporators include electricity, fuel oil, hot oil, hot water, natural gas, liquid propane, and steam. Some devices are equipped with an integral display and interface for programming and control. Others feature a horizontal design or a 55-gallon drum with an external heating source. 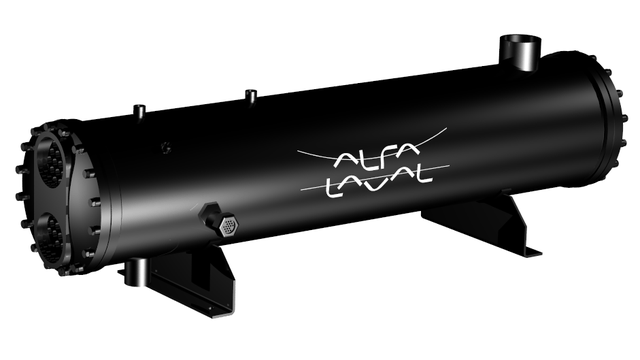 Falling film evaporators: In a falling film, evaporator liquid feed enters at the top, flows downward inside the steam-heated tubes in the form of a film, and leaves from the bottom.

Fluidized bed evaporators: Fluidized bed evaporators are used and suitable for concentration of liquid which exhibit severe fouling. They operate on a forced circulation principle and are characterized by fluidized bed calandria. In its tubes, particles (e.g. glass pellets, ceramic particles, or steel cylinder particles) are put into motion by the liquid flowing upwards and are eventually discharged into discharge chamber.

Forced circulation / crystallizer evaporators: The liquid feed is pumped into the steam-heated tubes at the bottom. The liquid is superheated as the static head is reduced during flow from the heater to the vapor separator and it flashes into a mixture of vapor and liquid. The liquid returns to the pump inlet where it is re-circulated. Vapor leaves the top of the evaporator. This type of evaporator is ideal for concentration of viscous liquids with high specific gravity or liquids that tend to form scaling. Forced circulation evaporators are also known as crystallizers.

Plate evaporators: Plate evaporators are of compact design. Instead of tube bundles, framed plates are used as the heating surface. These plate assemblies are similar to plate heat exchangers, but are equipped with large passages for the vapor flow. In these units a product plate and a steam plate are connected alternately. The product passage is designed for even distribution of liquid on the plate surfaces and low pressure drop in the vapor phase.

Rotary evaporators: Rotary evaporators (also called "rotavaps") are used to remove solvents from reaction mixtures and can accommodate volumes as large as three liters. They are found in almost every organic laboratory. A typical rotary evaporator has a heatable water bath to keep the solvent from freezing during the evaporation process. The solvent is removed under vacuum, is trapped by a condenser and is collected for easy reuse or disposal. Most labs use a simple water aspirator vacuum on their rotavaps, so a rotavap cannot be used for air and water-sensitive materials unless special precautions are taken.

Short path evaporators: The short path evaporator, with internal condenser, combines evaporator and condenser in a single apparatus. This eliminates pressure losses caused by piping. Therefore, the distance between evaporation and condensation is extremely short. Short path distillation is used for the gentle separation of materials at the lowest possible temperature.

Thermal evaporators: Thermal evaporation relies upon the boiling of wastewater at atmospheric pressure. There are numerous designs with distinct differences in efficiency, performance, maintenance, and safety issues. Because the evaporation rate is based upon the introduction of heat into the wastewater, thermal evaporation is likely to be the most consistent and reliable type of evaporation. The sources of energy are typically natural gas, propane, steam, or electricity.

Vacuum distillation evaporators: Vacuum distillation utilizes a simple principle. Under vacuum, water boils at a much lower temperature than 212° F (boiling temperature at normal atmosphere). This lower boiling temperature can eliminate chemical degradation that typically occurs at 212° F. The manufacturer can also recover and reuse, if desired, the large water phase (steam vapor) that has been evaporated and condensed. The reuse of the water phase is a standard alternative for all wastewater applications and is often the reason that vacuum evaporators are chosen for large volume applications. A lower boiling temperature can provide significant benefit to generators with fitting applications and waste recovery objectives. During evaporation, the waste chemicals can be concentrated without destroying their chemistry, and the chemicals can then be reused in the manufacturing process.

Evaporators are used in a variety of applications and industries. For example, some devices are used in alcohol processing, chemical processing, or distillation and food processing facilities. Others are rated for cryogenic use or designed for desalinization or seawater treatment. In the petroleum industry, evaporators are used for gas recovery, liquid recycling, and offshore production. In the plastics industry, evaporators process elastomers, epoxy resins, isocyanates, polyesters, polyethers, polymers, and stabilizers. Pharmaceutical companies use evaporators to handle acid chlorides, amino-acid esters, antibiotics, glucose derivatives, hormones, extracts, and vitamins. Other applications for evaporators include coating and etching, pulp and paper processing, research and development, semiconductor manufacturing, solvent recovery, volatile organic compound (VOC) recovery, and wastewater treatment.