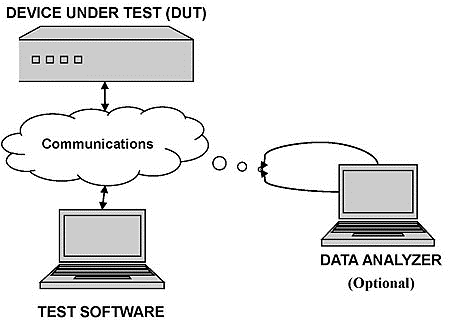 Automated test equipment (ATE) is computer-controlled test and measurement equipment that allows for testing with minimal human interaction. The tested devices are referred to as a device under test (DUT). The advantages of this kind of testing include reducing testing time, repeatability, and cost efficiency in high volume. The chief disadvantages are the upfront costs for programming and setup.

ATE is used to quickly confirm whether a DUT works and to find defects. When the first out-of-tolerance value is detected, the testing stops and the device fails.

For ATEs that test semiconductors, the architecture consists of a master controller (a computer) that synchronizes one or more sources and capture instruments, such as an industrial PC or mass interconnect. The DUT is physically connected to the ATE by a machine called a handler, or prober, and through a customized Interface Test Adapter (ITA) that adapts the ATE's resources to the DUT.

When testing packaged parts or directly on the silicon wafer, a handler is used to place the device on a customized interface board and silicon wafers are tested directly with high precision probes.

Manufacturing defect analyzers (MDAs) detect manufacturing defects, such as shorts and missing components, but can't test digital ICs as they test with the DUT powered down (cold). As a result, they assume the ICs are functional. MDAs are much less expensive than other test options and are also referred to as analog circuit testers.

In-circuit analyzers test components that are part of a board assembly. The components under test are "in a circuit." The DUT is powered up (hot). In-circuit testers are very powerful but are limited due to the high density of tracks and components in most current designs. The pins for contact must be placed very accurately in order to make good contact. They are also referred to as digital circuit testers or ICT.

A functional test simulates an operating environment and tests a board against its functional specification. Functional automatic test equipment (FATE) unpopular due to the equipment not being able to keep up with the increasing speed of boards. This causes a lag between the board under test and the manufacturing process. There are several types of functional test equipment and they may also be referred to as emulators.

Test types for interconnection and verification include cable and harness testers and bare-board testers.

Bare board automated test equipment is used to detect the completeness of a PCB circuit before assembly and wave solder.

In a bed-of-nails configuration, each circuit net on the board is connected to the tester, typically with one nail per net. The pins are aligned to make contact with test points on a printed circuit board. They are also connected to a measuring unit by wires. When the DUT is pressed against the BON, contact is made simultaneously with hundreds or thousands of individual test points. BONs typically require a vacuum or air source to ensure hold-down force is provided.

The flying probe system uses a low number of moving probes rather than the high number of fixed probes in the BON. Test times may be slower due to probe movements, but the method has compensating benefits. In practice, a flying probe can provide close to 100% test coverage on a board with thousands of nets of passive components and hundreds of digital devices. It is best used with assembled boards for new product introduction.

Optical inspection methods include scanning probe microscopes that reveal surface defects. Optical inspections do not need test fixtures and requires no electrical sources or measurements. Automatic optical inspection is helpful when placed at the end of a line producing soldered boards. Here it can quickly locate production problems such as solder defects and incorrect component orientation. The set up time can be tedious but once set the system can process boards efficiently, making it ideal for high volume processing. Automated x-ray inspection is similar to optical inspection. It can look through IC packages to examine solder joints.