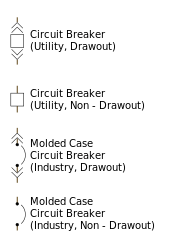 Circuit breakers are automatic electrical switches designed to interrupt current flow in the event of an overload or short circuit.

Electrical circuits can experience several conditions which pose danger to associated equipment or the circuit itself, namely current overload and short circuits. An overload occurs when a larger than anticipated electric current flows through a circuit, generating excess heat and the possibility of a fire. Short circuits (which are a main cause of current overload) occur when current is allowed to travel along an unintended, low impedance path in the circuit, resulting in rapid heat buildup, explosions, and fire.

(Other circuit protection devices which are related to circuit breakers include thermal overload relays and ground fault circuit interrupters [GFCI].)

When a circuit breaks, an operator must determine the source of the overcurrent and correct the problem. Overcurrent may be caused by introducing new devices into a circuit, causing an increase in the cumulative current and overloading the circuit; in this case simply removing the extra device would eliminate overcurrent. Circuit breakers are equipped with a manual actuator, so that an operator may easily reconnect the circuit and restart current flow after it has been interrupted.

Electromagnetic designs rely on an integral magnet's ability to become increasingly magnetized as associated electrical current increases. When current reaches an unsafe level, it magnetizes the electromagnet to a sufficient degree that it is able to pull down a lever attached to the switch linkage, breaking contact.

The second design uses a bimetallic strip, which changes in response to heat, to mechanically open the contacts. Bimetallic strips consist of two conjoined pieces of metal which expand at different rates when exposed to heat. This difference forces the strip to bend when heated. In a circuit breaker, the strip is attached by a spring to a contact. When excess heat from overcurrent causes the strip to bend and pull the spring, the contacts are pulled apart and the circuit is broken.

Circuit breakers must include some means to extinguish electric arcs which occur between open contacts when current flow is interrupted. The method of containing and cooling the arc varies based on the type and voltage ratings of a breaker; for example, a low voltage device may simply use air, while higher voltage breakers use vacuum, gas, or oil to extinguish arcs. For specific methods please reference the Type section below.

It is most helpful to classify circuit breakers based on the voltage levels they are capable of handling. Low-voltage and high-voltage devices, for example, are two product types with differing construction and operation techniques.

Low voltage breakers protect circuits using less than 1 kV (1000 V) of electricity. Miniature circuit breakers (MCB) are very common low voltage devices which can handle rated current of < 100 A; they typically have static (non-adjustable) trip settings. Most consumer distribution boards are made up of a series of MCBs, with one for every protected circuit. Molded case circuit breakers (MCCB) are a specialized type of low voltage device rated to 2500 A. MCCBs typically feature thermal or thermal-magnetic actuation like MCBs, with the added advantage of allowing adjustable trip currents. 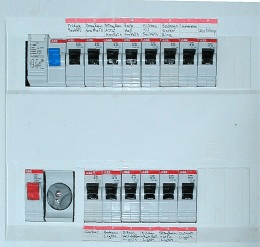 A 3-pole MCB; a 2-pole MCCB; miniature breakers within a residential panel.

Medium-voltage circuit breakers are rated between 1 and 72 kV (the standard medium-voltage range). These may be employed indoors within a switchgear panel, or may be installed as part of a power substation. MV breakers typically use current-sensing relays to switch circuits, and may use one of the following means to extinguish arcs:

Vacuum: the arc is contained and extinguished within a vacuum bottle. Vacuum circuit breakers are effective up to approximately 40.5 kV and are rated up to about 6300 A.

Air: the arc is extinguished by air. These devices are rated to 6300 A or higher and are often used in industrial plants or any location where ease of maintenance is key. Air circuit breakers are gradually being replaced by vacuum types due to the latter's longer lifespan.

Sulfur hexafluoride (SF6): the arc is extinguished within a chamber filled with sulfur hexafluoride gas, which has a high affinity for absorbing free electrons. While SF6 is an effective arc extinguisher, it is also a greenhouse gas and its emission is becoming increasingly regulated. Additionally, pumping the gas requires more mechanical energy than other types. 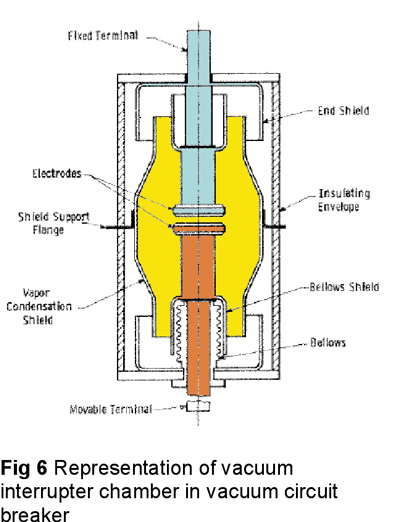 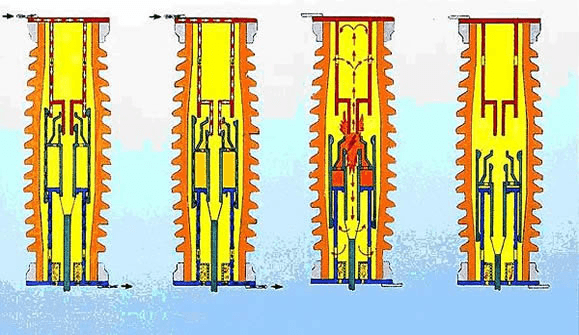 A vacuum circuit breaker (left); operation of an SF6 breaker

High-voltage breakers are typically installed in electrical power transmission networks, which involve voltages in excess of 72 kV; they are typically controlled by heavy duty solenoids. Specialized modern HV breakers are rated to 1000 kV or above. These devices may use air, vacuum, and SF6 methods to extinguish arcs; older devices may also use oil, although this practice is in decline due to spills and other hazards. Along with medium-voltage breakers, high-voltage switches are an integral part of switchgear panels, which are used to control, monitor, and protect transmission networks. 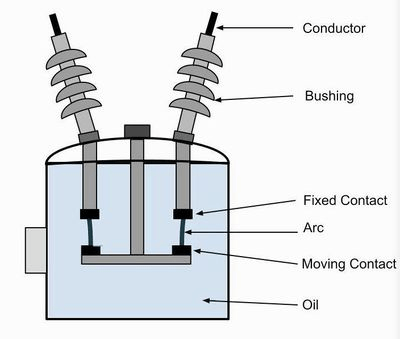 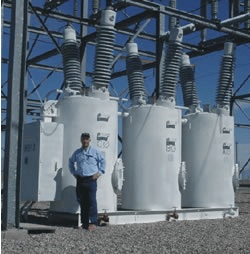 Like all switches, circuit breakers may be described using the number of circuits they control (referred to as "poles") and the number of switch positions they can adopt ("throws"). Because circuit breakers are relatively simple, "on-off" devices, they almost always have a single throw. The device below is a 3-pole, single-throw (3PST) breaker. Note that it can connect and control three separate circuits due to its three sets of terminals, while the long manual actuator (the single throw) controls all three circuits at once.

IEC 60898-1 — titled Circuit Breakers for Overcurrent Protection for Household[s], [etc.] — is a widely-followed international standard which lays out preferred methods of rating and labeling low-voltage circuit breakers. IEC 60898 defines "rated current" as the maximum current which can be continuously carried at an ambient temperature of 30° C. The standard defines preferred current ratings as (in amps): 6, 10, 13, 16, 20, 25, 32, 40, 50, 63, 80, 100, and 125. It also establishes a trip current rating signified by a letter; the trip rating is based on a factor of rated current.