Potentiometers, rheostats, and trimmers are adjustable resistors used to measure or divide voltages in order to protect or control circuits.

The terminology surrounding potentiometers and related devices is potentially confusing. First, the term "potentiometer" itself is used to describe two different devices. While both form or use a voltage divider, their functions and uses are very different. Potentiometers as described in this article are variable resistors used to control small amounts of electrical power, while the second devices uses voltage division to measure a circuit's voltage. In a simple sense, the former products could be considered controllers, while the latter considered sensors.

Because this article deals with three distinct product types based on similar technology and form factor, it is helpful to define all three before proceeding:

Trimmers are potentiometers which need infrequent adjustment. They are often used to calibrate a device or circuit after manufacturing, and often require a special tool for adjustment.

As stated above, all three product types are or can be potentiometers, depending upon the device's use or construction.

All rotary potentiometers have three terminals and an adjustable shaft, as shown in the image below. 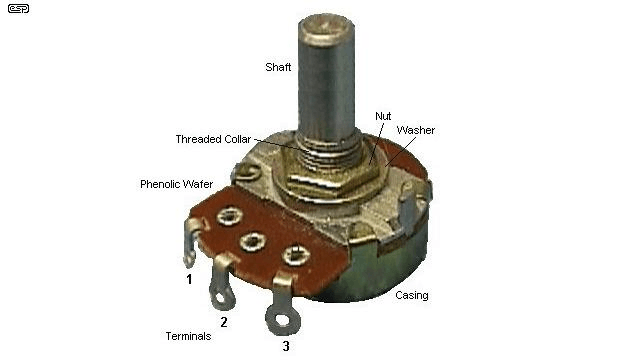 In a standard potentiometer configuration, Terminal 1 would be assigned as the ground, Terminal 2 would be the wiper (output), and Terminal 3 the input. The ground and input terminals are situated at either end of a (typically circular) resistive element; the wiper may slide along the element while making electrical contact with it. By turning the shaft, the wiper can vary the device's resistance from ground (no signal) to input (maximum signal). Basic potentiometers — even those described as "full-turn" — are capable of 270 degrees (or approximately 3/4 of a turn) of rotation.

Linear potentiometers are constructed similarly to rotary types, except that their resistive elements are strips and the terminals are arranged in a linear fashion, as seen in the image below. 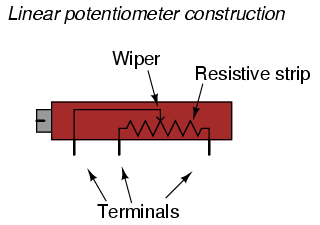 Taking a simple volume control as an example, we can describe a potentiometer's theory of operation. Imagine first that the wiper contact is moved fully counterclockwise and is nearest to the ground contact. In this position, resistance is maximized and no signal (or, in this case, sound) will pass. By moving the wiper clockwise (using the shaft) toward the input contact, the user "selects" a different point on the resistive element, forming a voltage divider. This means that the device resistance and the corresponding output signal is proportional to the wiper's position. As noted above, a wiper moved fully clockwise (ie closest to the input contact) results in zero resistance and maximum signal output — in this case, the loudest volume.

Manufacturers produce potentiometers with a set relationship between the wiper position and the device resistance; this relationship is known as a "taper" or a "law." The two most common tapers are linear and logarithmic.

Linear tapers result in an equal change in resistance per unit of rotation. This 1-to-1 ratio results in a straight line on a graph of the relationship. Potentiometers with linear tapers are marked with a 'B' or 'LIN.' Older potentiometers may be marked with an 'A', although manufacturers have ceased this coding.

Logarithmic tapers are used in applications such as volume control to achieve a smooth transition from quiet to loud. Logarithmic potentiometers are marked with 'A' or 'LOG', and were formerly marked as 'C.' Some older potentiometers may use an antilog (or "reverse audio") taper; these devices were marked 'F' and are not regularly produced today.

In order to cut manufacturing costs, many suppliers construct potentiometers using two varying resistive elements joined together to achieve a hybrid between linear and logarithmic tapers. This taper is sometimes referred to as a "commercial log." The graph below shows the relationship between rotation and output percentage for all taper types listed above.

Potentiometers have a wide range of uses and can generally be applied to any application that requires control of a small amount of power or signal. Common applications include:

A potentiometer's resistance rating is usually specified in kilo- or megaohms. Common device resistances are 1k, 5k, 10k, 25k, 50k, 100k, 500k, and 1M. Resistance tolerance, another important specification, is expressed as a percentage and denotes the device's physical tolerance within the limits of its own resistance range.

Power rating is mostly important in industrial applications and is rarely considered in audio uses. Power is expressed in watts (W) and represents a maximum safe rating, as a device's power changes with varying resistance. Potentiometers are typically designed to control 1 watt of power or less.

Operating voltage is expressed in volts (V) and represents the maximum voltage that can be applied to the device. A potentiometer subjected to power or voltage above its maximum rated threshold may suffer mechanical damage or destruction.

The resistive material of a potentiometer can be constructed using one of several different material types. These types each have common characteristics and typical power ratings, as shown in the table below.

The design, construction, testing, and use of potentiometers, rheostats, and trimmers may be governed by certain standards. Common potentiometer standards documents include:

IEC 60393-1 -- Potentiometers for use in electronic equipment