Because the controller is only one part of a larger control system, the system into which it will be integrated is of prime importance and should be analyzed to determine the controller's specifications. The type of input sensor, type of output signal, and control algorithm must be compatible with the controller to achieve a stable and efficient heating or cooling system.

Temperature controllers may be used in a number of heating and cooling applications, including boiler, furnace, hot runner, HVAC, and laboratory control. While the following video is specific to PID controllers discussed below, it gives a good overview of a temperature controller's place in a home HVAC system.

Temperature controllers can be classified using two different principles: the type of control they provide, and the type of device they control.

On-off controllers are used in environments which do not require precise control or rapid switching, and in applications where the temperature changes extremely slowly.

The graph below shows typical on-off heating control, with the blue blocks indicating "on" switching. Note that the controller has first switched the heating system on for an extended period in order to "overshoot" the setpoint of 200°, then periodically switches briefly when the temperature falls below the setpoint to a certain degree. 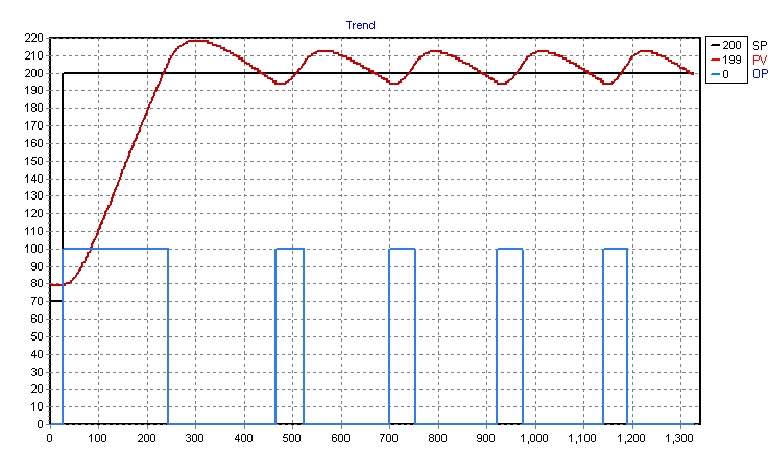 PID controllers combine proportional control with two additional adjustments, integral and derivative, designed to further compensate for changes in the heating or cooling system. Integral is also known as the "reset" function, in that it pushes temperature toward the desired setpoint once the proportional "droop" occurs, resulting in more efficient control. The derivative or "rate" function works to eliminate over- and undershooting by switching the heater or cooler off when the temperature approaches the setpoint too fast.

The graph below illustrates temperature control using PID. Note that, after a certain period of time (toward the right side of the graph), the controller has achieved precise control based on the established setpoint.

There are many different types of controller inputs and outputs.

RoHS and WEEE compliance are important to consider when selecting temperature controllers.

The Restriction of Hazardous Substances directive (RoHS) is a European Union order which restricts the use of six hazardous materials in the manufacture of electronic and electrical devices. Although they are often simply referred to as "lead-free", RoHS products contain less than 0.1% of:

The RoHS directive protects the health of electronics industry workers and those in close proximity to areas where high-tech waste is stored. Despite initial concerns about the reliability of lead-free solder, RoHS products have been favorably tested to withstand harsh environmental conditions and severe vibration and shock requirements.

The Waste Electrical and Electronic Equipment directive (WEEE) became European Law in 2003, at the same time as the RoHS directive. WEEE legislation sets collection, recycling, and recovery targets of electrical products, with minimum amounts for recycling recovery. WEEE compliant manufacturers and distributors must provide users with the possibility of returning household electronic equipment to them for recycling free of charge.