Generator is the name given to the class devices that convert mechanical energy into electrical energy; the output can be AC or DC. Generator head refers exclusively to the energy conversion assembly of the generator.

An alternator is a specific type of generator, one that creates synchronous AC power. The term alternator also describes the part of a motor vehicle that generates electrical power for the vehicle, which initially generate AC power that is converted to DC.

Generators that output DC electricity power most often do so by spinning a conductive wire winding called the armature inside a magnetic field. In some rare cases this is reversed, where the magnet spins inside a stationary coil. Rotational energy is supplied by a belt, chain, or direct drive from a power source such as an internal combustion engine. The magnetic field is generated by an electromagnet or permanent magnet and the strength of the magnetic 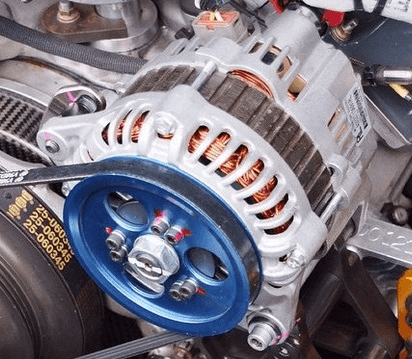 field affects output current. Voltage and power is determined by the rotations per minute (RPM) of rotor winding. While the electricity created by the field is initially AC in nature, it is converted to DC by commutation. The armature is commutated with brushes that create an electrical rotary switch system. This method of commutation connects and disconnects to the armature such that the output is rough DC power.

Generators that create AC power, which are also called alternators, do so most often with a stationary armature and a rotating magnetic field. This is opposed to standard DC generators. To create the magnetic field, either permanent magnets are used—called a magneto, or an electromagnet that requires some form of power. Since the magnet is rotating, the coupling for this electromagnet power can be in the form of brushes called a commutator or it can be inductive. AC generators that are brushless and use inductive coupling have no brushes that wear out but tend to be larger in size as they require additional coils to create the magnetic field.

An automotive alternator is a specific type of generator where the magnetic field is spun inside windings of conductive wire like an AC generator. Electromagnets mounted on a rotor create the magnetic field, which is powered by current transmitted through two brushes on separate slip rings. Since the windings are stationary in an alternator, it allows them to have higher RPMs. For this reason they are utilized in automobiles; even when the engine is idle the alternator produces enough electricity to power electronics. Rotational input is provided by a linkage to the vehicle crankshaft. The most common configuration is to have three windings in an alternator provide three-phase AC power as it is more easily converted to DC.

To rectify the current into DC alternators use a bridge rectifier. This includes six diodes, two diodes for each winding that only allow current to pass in one direction. After, the output is unified in a pulsating DC current that is acceptable for most automotive applications.

Automobiles pre-1960 used a DC generator for electrical power. As technology and economies of scale have prevailed, alternators have supplanted DC generators as they provide higher amperages, can charge an auto battery while the engine idles, and are easier to maintain, despite the slightly more complicated design.