Current sensors measure AC and/or DC current levels. The sensors in this selection guide measure current and provide some sort of output that corresponds to the current being measured. The most important distinction to make when selecting a current sensor is whether AC and/or DC current needs to be measured. Another important specification to consider is if the sensor needs to be in-line with the circuit or if it works by being clamped around the wire to be measured.

The technology used by the current sensor is important because different sensors can have different characteristics for a variety of applications. Most sensors work because a current-carrying wire produces a magnetic field. Current sensing resistors are used when current is directly measured in the circut.

Hall Effect - Hall effect sensors consists of a core, Hall effect device, and signal conditioning circuitry. The sensor works when the current conductor passes through a magnetically permeable core that concentrates the conductor's magnetic field. The Hall effect device, which is mounted within the core, is at a right angle to the concentrated magnetic field and a constant current (in one plane) excites the Hall device. The energized Hall device is then exposed to a magnetic field from the core and it produces a potential difference that can be measured and amplified into process level signals such as 4-20mA or a contact closure.

Inductive- Inductive sensors use a coil through which a current carrying wire passes. This causes power to flow in the coil that is proportional to the current. This happens because of the magnetic field produced by flowing current. Inductive sensors are used for AC currents. The sensor has a wire-wound core and a signal conditioner. As the current conductor passes through the core, it becomes magnified by the conductor's magnetic field. Since AC current is constantly changing potential from negative to positive (general rate of 50 to 60 Hz) and therefore creating an expanding and collapsing magnetic field, a current is induced in the windings. The secondary current is converted to a voltage and conditioned to output process; signals such as 4-20mA or contact closures.

Performance specifications describe how current sensor will interact and operate in the desired environment.

The type of output used by a current sensor depends on the desired application and operating environment. 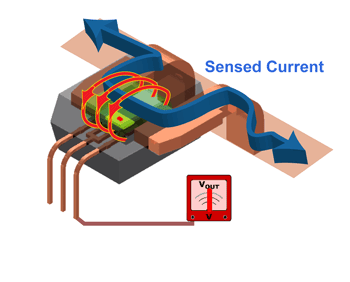 There are several mounting or installation options for current sensors.

Sensor types can be closed loop -- meaning they have to completely surround the current carrying wire -- or open loop where they don't need to make a complete circle. 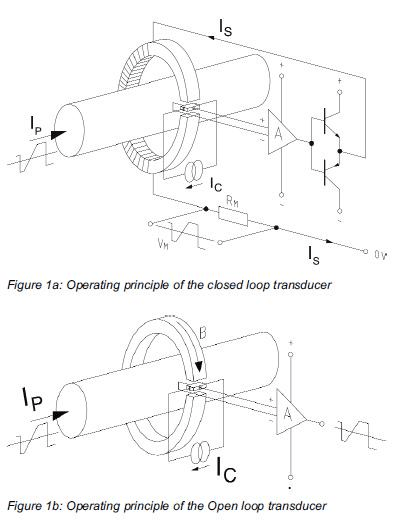 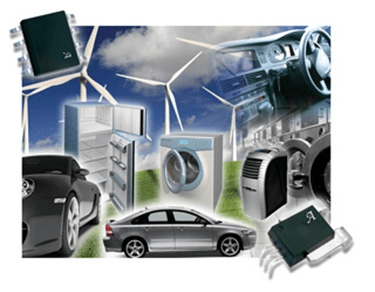 There are a variety of applications for current sensors. For example, some devices are used for power metering, control system diagnosis, current supply measurement, and the control of complex loads from electric motors. Others are used for charge integration and condition monitoring of rechargeable batteries. Specialized current sensors, such as those used in commercial appliances, often incorporate safety cut-off features and surge trips. High voltage current sensors are also available. PCB-mounted current sensors combine the benefits of a small footprint with the advantages of signal processing that can be achieved by using an existing microprocessor.

Current sensors that are identified as intrinsically safe (IS) equipment are low-power devices that meet design, installation, and maintenance standards established by the Instrumentation, Systems and Automation (ISA) society. Other current sensors include:

CSA Mark - Products that bear a CSA Mark have been tested by the Canadian Standards Association (CSA) and meet applicable standards for safety and/or performance. These standards are written and administered by organizations such as the American National Standards Institute (ANSI), Underwriters Laboratories (UL), and CSA International. CSA Marks may appear alone or with indicators. CSA Marks that appear alone are used with products certified primarily for the Canadian market, to the applicable Canadian standards. CSA Marks that appear with the indicators "C" and "US" or "NRTL/C" are used with products certified for both the U.S. and Canadian markets, to the applicable U.S. and Canadian standards.