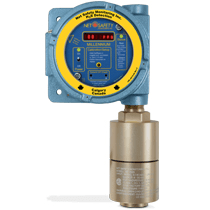 Important measurement specifications to consider when looking for gas sensors include the response time, the distance, and the flow rate.

Gas sensors can output a measurement of the gases detected in a number of ways.  These include percent LEL, percent volume, trace, leakage, consumption, density, and signature or spectra.

The International Society of Automation (ISA) specifies standard ISA 12.13.01 which describes test methods that apply to portable, transportable, and fixed devices for the detection and measurement of flammable gas or vapor concentrations in air.