Safety is a primary use for isolation transformers. By isolating an electrical device from connected mains power, the transformer protects the device in relation to grounded objects which may be hazardous around high voltages. A tester working with a non-isolated electrically live device is at high risk for becoming an Earth ground and conducting high voltages through the body, resulting in severe burns or death.

As described below, some isolation transformers step voltages down to render the current or signal safer, but others simply provide 1:1 isolation. For example, a 1:1 isolation transformer that accepts 120 VAC will also output 120 VAC. The importance regarding safety is that, despite the high voltage still flowing through the secondary coil, isolating the transformer's second coil prevents a pathway to the primary coil through the ground, reducing the likelihood of severe shock. It is important to note that while touching a single live conductor of an isolation transformer is not inherently dangerous, touching both live coils with bare skin may still result in electrocution. 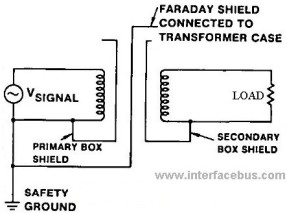 A Faraday shield (and additional shielding) between two isolated coils.

Isolation transformers can be specified by type, and further classified by winding arrangement, construction, or alternating current (AC) power type.

Specialized variable transformers, also known as variacs, are produced with a knob or other control to enable variable output voltage.

Isolation transformers may be manufactured to be compatible with single-phase or three-phase AC power.

The images below show single-phase (left) and three-phase AC waveforms. 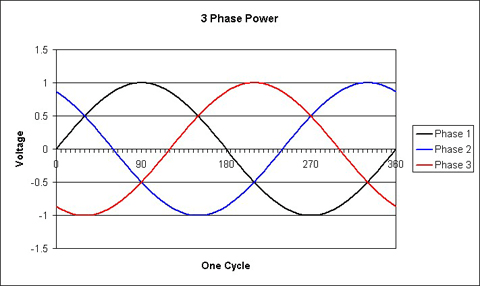 Isolation transformers may be manufactured to various quality standards. This is especially important for medical transformers, as medical device failure may have fatal consequences when used in hospitals and other medical applications.

Standards for medical transformers include:

Isolation transformers may feature enclosures that are rated by the National Electrical Manufacturers Association (NEMA). NEMA enclosures are rated based on their ability to protect against dust, water, and light.

All About Circuits - Electrical Isolation