solid state devices use proximity sensors, light sensors, or electric switches. They can be used as control devices for normal machine operation or as emergency switches.

Limit switches are extremely common devices used to solve a multitude of problems in packaging, manufacturing, motor control, safety, and consumer applications. Within these applications, they can be used to detect presence/absence, speed, position, range of motion, and travel limit, as well as to count discrete objects or events and break a circuit. Typical uses include:

Limit switches are primarily classified by the type of motion they limit or control.

Rotary limit switches operate by means of a rotating shaft. After the shaft reaches a set number of revolutions or a set angle, the switch activates. In the image below, the shaft can be seen extending through the front and rear of the device, while the gears on top are responsible for controlling attached machinery upon switching.

Linear limit switches detect and are triggered by linear motion. They are often used in conjunction with linear actuators.

While most limit switches use electromechanical means to detect an object, some may use solid state components to accomplish this.

Electromechanical switches use arms, levers, knobs, plungers, or other actuators that make physical contact with another object. When the object contacts the actuator, the switch's contacts either make or break a connection depending on the switch's contact orientation. 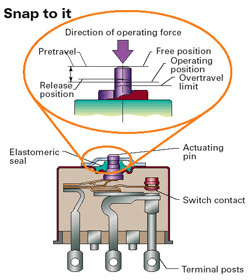 Because of the physical nature of operation, mechanical limit switches are subject to wear but are often manufactured as extremely rugged devices to compensate. Other advantages include high current switching capability (typically up to 10 A), excellent environmental resilience, and low cost. However, mechanical limit switches may be limited by the need to make physical contact with an object.

When discussing mechanical switches, the term "contacts" refers to the conductive pieces of metal that touch to complete a circuit or separate to break it. Contact specifications include contact type and state.

A limit switch may be normally open (NO) or normally closed (NC) in its normal resting position. A NO device, when actuated, switches to close (or "make") the circuit, whereas an NC switch would open and break the circuit when actuated.

A limit switch may feature one of three different types of contact type.

Maintained contact devices maintain their triggered position even after the actuation condition ceases. The contacts must be reset by mechanical action.

Positive opening (or positive breaking) contacts remain open in the activated position even in the event of mechanical failure. Positive opening switches are often used in critical safety applications because of their reliability.

When selecting a limit switch it is important to understand the switch's poles and throws specifications.

The image series below illustrates, from left to right, a single pole (SP) and double pole (DP) switch. 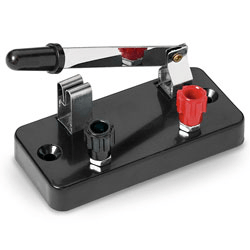 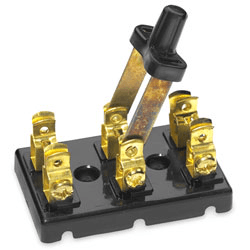 It is also important to consider a limit switch's throws, or the number of distinct positions a switch is capable of.

A limit switch may be certified or approved by a standards body or other organization.

A Conformité Européenne (CE) mark ensures that a product complies with European Union (EU) legislation and may be placed on the European market. A CE mark is not legally required to certify a product's quality, but often ensures quality in specialty applications such as medical use.