Although early power MOSFET manufacturing used several different designs, the Vertical Diffused MOS (VDMOS) — also known as the Double-diffused MOS (DMOS) — emerged as the predominate design. The terms "vertical" and "diffusion" are adequate to describe the construction of a power MOSFET. "Vertical" refers to the fact that, unlike traditional (or "lateral") MOSFETs, a power MOSFET's source terminal is above its drain terminal, resulting in a primarily vertical current. By contrast, a lateral MOSFET's source and drain terminals are on opposite sides of the device, with the gate situated on the n-doped channel. "Diffusion" refers to the device's manufacturing process: the p-type and n-type wells that sit on the n-type substrate are created using a double-diffusion process. 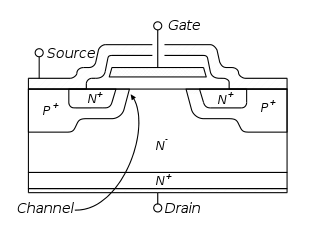 A VDMOS diagram, showing its vertical construction and N+ and P+ wells.

Despite the predominance of VDMOS, some lateral power MOSFETs are still used in specialized applications.

Power MOSFET operation is slightly different than that of a lateral e-MOSFET. In lateral MOSFETs, planar construction results in current and breakdown voltage values which are functions of the channel dimensions, rendering the device relatively inefficient. In contrast, the vertical construction of power MOSFETs results in voltage ratings which are functions of the doping and thickness of the n-type well, while current rating remains a function of channel width. Power MOSFETs are therefore able to sustain high voltages and high currents without increasing the size of the device.

The video below provides an excellent introduction to transistors, semiconductors, doping, and, towards the end of the video, power MOSFET.

Power MOSFETs are used in many applications necessitating power semiconductors. Compared to insulated-gate bipolar transistors (IGBT) and thyristors, power MOSFETs feature very high switching speeds and improved efficiency at low voltages. Power MOSFETs are the most common low-voltage (less than 200 V) switch in use, and can be found in power supplies, DC-DC converters, and controllers.

Like all MOSFETs, power MOSFETs switch and regulate a current that flows between the source (S) and drain (contacts) by varying voltage at the gate (G) terminal. By applying a voltage to the gate, a channel is created between the gate and the source, allowing current to flow.

By increasing the gate-source voltage (VGS), the channel becomes larger and the drain current (ID) increases. The relationship between the gate voltage and drain voltage is dependent upon the following equation: 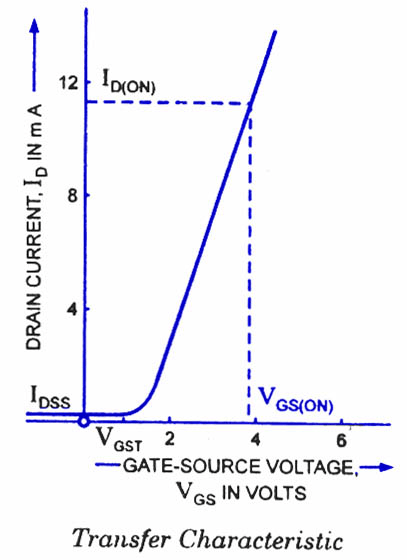 Power MOSFETs can be manufactured and tested using standards developed by a diverse range of societies and associations. Examples include: