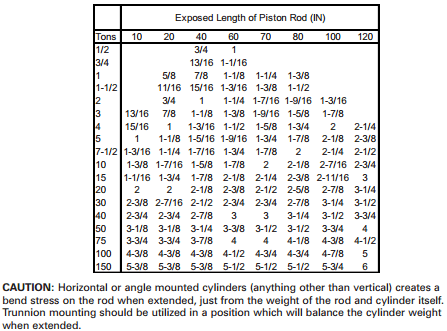 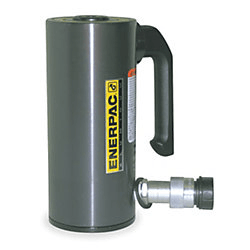 Speed - The speed is controlled by valves, which control the flow of the hydraulic oil entering or leaving the cylinder. Cylinders are typically allowed to run at their maximum natural speed. This maximum speed is determined by cylinder size, port size, air pressure, bore and length of the hoses, and the load against which the cylinder is working. From this natural speed, the user can increase speed, or more often, reduce it. Smaller valves have slower cylinder movement; however the maximum natural speed of these cylinders can often be achieved with a valve that is one or two sizes smaller than the cylinder port size.

Force- Force is related to the diameter of the piston, but they are not directly proportional. In general, the larger the piston area, the more force is produced. Force ratings can differ somewhat in opposite directions. The instroke (pull) force is less than the outstroke (thrust) force when powered hydraulically by the same supply of compressed fluid, due to the effective cross sectional area reduced by the area of the piston rod. The relationship between force on outstroke, pressure, and radius is as follows:

Fτ is the resultant force

P is the pressure distributed load on the surface

r is the radius of the piston

∏r2 represents the effective area of the piston surface where the pressure is acting on.

Fτ is the resultant force

P is the pressure distributed load on the surface

r1 is the radius of the piston

r2 is the radius of the piston rod 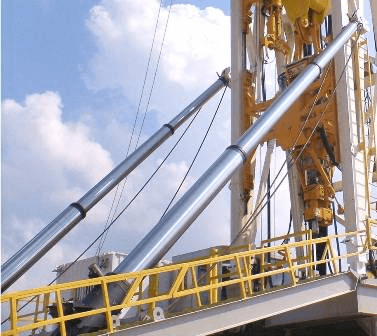 Hydraulic cylinders can be single action or double action.

A single action hydraulic cylinder is pressurized for motion in only one direction. It is a simple, inexpensive design. Once the work is completed, the oil is depressurized and returned to the fluid reservoir. The piston returns to the starting position by an external force such as gravity or a compressed spring.

A double action hydraulic cylinder can move along the horizontal (x-axis) plane, the vertical (y-axis) plane or along any other plane of motion. This design uses pressurized hydraulic fluid to extend and retract the piston rod. This requires fluid ports at both ends of the actuator in order for the oil to be directed onto both sides to the piston.

Choices for mounting method include flange, trunnion, threaded, clevis or eye, and foot. The mount location can be cap, head, or intermediate. It's important to select the right the mounting style since certain mounting styles

can cause the end caps of a tie-rod cylinder to misalign causing loss of fluid and pressure.

Fixed mounting styles, such as front and rear flanges, threaded side tapped mounts, and foot mounts, allow the actuator to be fastened to a flat surface. When using a fixed mount it is important to ensure that the load doesn't exert side forces on the piston, which will cause wear inside the cylinder. Side loading causes a shorter service life, and erratic cylinder movement.

Pivoting mounts, including rear pivot, spherical eye mounts, and trunnion mounts, allow for misalignment since the actuator is able to swing or pivot through an arc.

Hydraulic cylinders are used in many industries including agriculture, military and government, oil and gas, and fire and rescue. They are easily sized and are ruggedly designed so they can be used in various applications and environments.

How to Select Air Cylinders