Thermal switches and thermal protectors are thermally-actuated electro-mechanical on/off switches. They differ from thermal fuses as they are reusable, and suited to protecting against temporary situations that are common and user-correctable. The switch is activated by a temperature differential, at which point there is a change in state either from normally open to closed or from normally closed to open. The contacts movement may be accompanied by a faint audible as power to the electrical circuit is interrupted. 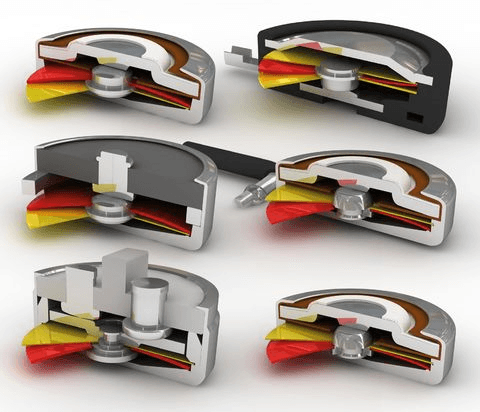 They are often used as thermal protection devices to prevent damage from over-heating of electrical circuits, although they can also be used as a temperature control device. They prevent overheating in a variety of consumer, industrial, and commercial products by controlling power to circuitry in power supplies, electric motors, transformers, lighting fixtures, ballasts, and battery packs. Temperature control applications include operation of heat pumps, electronic cooling fans, low voltage relays that actuate a motor starter and igniter for an oil burner, a heavy-duty switch for electrical units, or a solenoid-operated valve on a gas furnace.

Thermal switches and thermal protectors have a set point temperature that is either fixed or field adjustable. The set point is the rated temperature at which the device undergoes a change in state associated with movement of the electrical contacts. Fixed-point devices are rated at a given temperature while field-adjustable devices have a temperature range over which the set point can be adjusted.

The maximum current rating is the maximum electrical load in amperes that the contacts of the electrical switch is designed to carry.

The maximum voltage rating is the greatest potential difference that the device is designed to hold across open switch contacts without arcing or development of a current. The maximum voltage is specified for alternating-current (AC) and direct-current (DC), with AC exhibiting a greater self-extinguishing tendency of an arc across an air gap and therefore able to hold a greater potential difference.

Expected number of cycles the switch can undergo before contact wear causes failure.

IEC 60034-11 - This part of IEC 60034 specifies requirements relating to the use of thermal protectors and thermal detectors incorporated into the stator windings or placed in other suitable positions induction machines in order to protect them against serious damage due to thermal overloads.