Weather instruments include sensors, gauges, and other devices designed to measure one or multiple weather conditions.  They measure and display information about atmospheric conditions for the purpose of weather forecasting and study. These measurements can be taken manually or automatically, depending on the capabilities of the device.

Placement of weather instruments in of key importance when taking measurements. For example, wind measurement instruments must be placed in an area which is completely free from obstructions which may interfere with natural wind conditions, while placing temperature or humidity instruments in direct sun often results in inaccurate measurements.

Weather instruments are used by professional meteorologists and amateurs alike. Personal weather stations are sometimes established for the sole enjoyment of the owner, but data from these stations is often shared through initiatives such as the Citizen Weather Observer Program (CWOP) for short-term forecasting. Due to the variety of instrument quantity and quality, however, amateur reporting is subject to wide variations in measurement accuracy.

Weather instruments are classified foremost by the type of atmospheric conditions they measure. Complex weather meters may measure multiple conditions listed below.

Wind speed — properly, the change in air velocity — is measured by an anemometer, which is also known as a wind speed meter or air speed meter. Anemometers are produced in several different forms, each of which is most suitable for a specific application, as shown in the table below.

Rain and snow gauges measure the amount of liquid precipitation. Rain gauges — also known as udometers, pluviometers, or ombrometers — typically measure rainfall in millimeters but may also report data as inches or centimeters. Like most weather instruments, these gauges can be manually-read or read automatically by automatic weather stations (AWS).

Rain gauges can take a variety of forms, as listed below.

Standard rain gauges are graduated cylinders with integral funnels. They are typically designed with a double wall so that the outer compartment catches rainwater that exceeds the capacity of the inner reservoir. The excess water can then be measured in a separate cylinder and added to the originally-measured amount.

A weighing-type gauge consists of a container resting on a scale. The scale periodically weighs the container and continuously records or graphs the resulting weight changes.

Tipping bucket gauges are more complex devices consisting of a funnel which channels water into a pivoting seesaw-like apparatus. After a preset amount of precipitation is detected, the apparatus dumps the collected water and sends an electrical signal to record the amount of rainwater collected. These gauges therefore not only record total rainfall, like a standard gauge, but can also measure the rate of rainfall. However, rainfall which stops before the seesaw tips can result in inaccurate total measurements.

(left to right) A simple rain gauge; a standard gauge; a tipping gauge.

Image credit: The University of Maryland

While similar to rain gauges, snow gauges are different in design and function. Snow gauges typically feature a large funnel-shaped catchment which attaches to a cylindrical gauge. When snow is collected, the gauge is removed and the snow is allowed to melt. The accumulated water is measured (typically in centimeters) and is then multiplied by 10 to determine the original height of the snowfall.

Temperature may be measured by analog or digital thermometers. Additional information about these devices can be found at the Industrial Thermometers Selection Guide.

Aneroid barometers are a type of analog barometer constructed with a small, flexible beryllium/copper capsule called an aneroid cell. The cell is attached to a strong spring. Changes in atmospheric pressure cause the cell to expand or contract; this movement drives a system of mechanical levers which translates the pressure change into the movement of the gauge's needle. 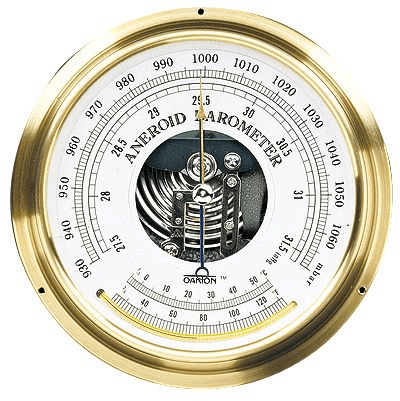 A barometer gauge, with inHg (inner numbers) and hectopascals (hPa)

Digital barometers are newer devices which use pressure sensors to measure changes in air mass. They typically feature special capabilities such as data recording, adjustable unit displays, and audible alarms.

Measuring humidity is more complex than the measurement of other atmospheric conditions. Older designs for hygrometers — devices designed to measure humidity — relied of the measurement of wet vs. dry temperature and even the tension of human hair to determine humidity. Modern hygrometers typically use resistive or capacitive sensors, which detect the effects of humidity on the dielectric constant and resistance, respectively, of a specialized polymer material. Still, resistive sensors, which are less sensitive and resistant to temperature change than capacitive types, must be combined with a temperature sensor for accurate measurement, as changes in the conductive polymer tend to be affected by both humidity and temperature. 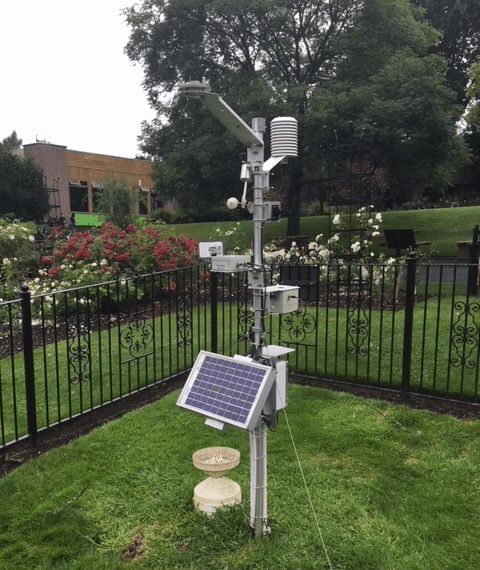 Dew point refers to the temperature at which water vapor condenses into liquid at the same rate it evaporates. This measurement is useful in determining relative human comfort levels as well as the likelihood of icing and fog on aircraft. Dew point is intimately related to relative humidity and is sometimes measured with a dew point meter, which consists of a metal mirror which is cooled as air is passed over it. The temperature at which dew forms on the mirror is the dew point. More modern dew point meter designs incorporate a capacitive sensor similar to those used in hygrometers. Dew point meters are often combined into hygrometers, so that the device is capable of measuring both relative humidity and dew point.

In addition to the instruments listed above, weather stations may make use of specialty instruments to measure less-common atmospheric parameters. Some examples are listed below.

Weather instruments may be produced, used, and tested according to various standards; these standards are typically specific to the instrument type. Example standards include: