Level switches are used to detect liquid or powder levels, or interfaces between liquids. These level measurements are indicated via an electrical switching action. Level switches can be used either as an alarm device or as control switches, turning something on or off, such as a pump, or sending a signal to a valve actuator. What makes level switches special is that they have a switched output and can be either electromechanical or solid state, either normally open or normally closed.

There are several important factors to consider when selecting a level switch. These specifications are related to the function of the switch in the desired application.

When selecting a level switch, the user needs to determine if the electric circuit requires a normally open or normally closed switch.

There are two basic level-measurement types:

Point level sensors or multi-point sensors mark a specific level and communicate to the user if the media is above or below that level. They are used generally as a high alarm or switch. These level sensors can also be integrated in a single device to add a low alarm, or to serve as a stepped version of a continuous level.

Continuous level sensors measure liquid or dry material levels within a specified range and provide outputs which continuously indicate the level. They are more sophisticated devices than point level sensors because they measure over a range of levels instead of at one point to let the user know the exact amount of a substance. This produces an analog output that directly correlates to the fluid level in the container.

Solid-state switch - Solid- state switches are electric devices that do not have moving parts to wear out. They are able to switch faster without sparking between contacts or problems with contact corrosion. Their disadvantages include a high cost to build in very high current ratings.

There are several technologies available that can measure the level of media in a system. A full description and application of each technology is available in the Level Sensor Specification Guide.

The typical options for poles and throws are available. Most switches have one or two poles and one or two throws, but some manufacturers will produce custom level switches for special applications. The number of poles describes the number of separate circuits which can pass through the switch at the same time. The number of throws describes the number of circuits each pole can control. This is noted by the configuration of the circuit (NO/NC). Breaks are interruptions to the circuit caused by the separated contacts the switch introduces into each circuits it opens, or interrupts in the circuit.

Single Pole, Double Throw (SPDT) - Single pole, double throw (SPDT) switches make or break the connection of a single conductor with either of two other single conductors. They usually have three terminals and are commonly used in pairs. SPDT switches are sometimes name="idPrompt_switch_dpst">called three-way switches.

Other- Other, special throw types with more than two poles. Examples include switches that are designed to split loads into separate circuits (e.g., headlamp switch).

Devices with field adjustable measurement ranges allow for the user to adjust the measuring range depending on the media container and the environment conditions.

Also of critical concern are the ratings for current and voltage the switches require. Analog outputs from level switches can be current or voltage signals. Also possible is a pulse or frequency.

Computer signal outputs that are possible are usually serial or parallel.

Level switches can have displays that are analog, digital or video displays. Control for the devices can be analog with switches, dials and potentiometers; digital with menus, keypads and buttons; or controlled by a computer.

Media is the material that the sensor needs to measure. Level switches can be responsible for measuring a wide variety of media in fluid level systems in many industries. The two general media types include liquid and dry materials.

Depending on the needs of the application, level switches can be mounted a few different ways. These switches can be mounted on the top, bottom or side of the container holding the substance to be measured. Some factors to consider when selecting a mounting option is the package size of switch or sensor, and the space available in the application. The switch should be rugged to handle the environment of the system.

Some features that can make level switches more desirable are being programmable, having controller, recorder or totalizer functions and a built-in alarm indicator, whether audible or visible.

Also important for some applications are sanitary ratings and the ability to handle slurries with suspended solids, such as wastewater or sewage.

Level monitoring is important in a wide variety of applications. Any industrial process involving the filling or storing a liquid in a tank or vessel would benefit from the use of a level switch. They are also an important part of process control systems which manages flow rate into and out of a storage vat or reactor. 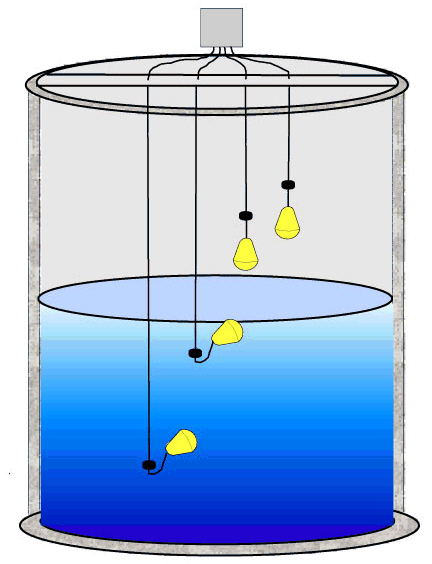 Level switches can be used for high or low level sensing and alarms, leak detection, overfill shutoff and regulating the interface between levels of different media. They are found in a wide variety of industries-- not limited to-- manufacturing, food and beverage, chemical and pharmaceutical, marine, medical, and fuel/energy management.