Solenoid valves are used to open and close a system. The media enters through the inlet port and flows through the orifice before it continues to the outlet port. This port is closed and opened by the plunger. Solenoid valves are used in a wide variety of industries. They are used in machinery, devices, and equipment such as refrigerators and automatic faucets. Solenoid valves are commonly used in central heating systems to control the thermostat to regulate the flow of heated water to the heating element. They are also used in automatic irrigation sprinkler systems, air control, fluid control, and in pharmacology experiments.

Solenoid valves generally have two ports: an inlet and an outlet port. There are several types of solenoid valves that include three or more ports.

Four-way solenoids provide a positive two directional action. They can be used instead of positioners to provide on-off operation of double-acting valves. When the solenoid is de-energized, it sends the full air supply to one side of the actuator and exhausts the other side to the atmosphere.

Normally open -- Normally open valves close when the coil is energized, allowing the media to flow through the system. This valve state is best used for water, air, and noncorrosive liquids.

Solenoid valves come in a variety of sizes and materials in order to integrate within many fluid management systems. The body of the valve should be made of a material that is compatible with the system media to prevent premature failure of the valve, or contamination of the media. The most important components to consider when selecting a solenoid valve are the seal, coil, and the ports of the valve. 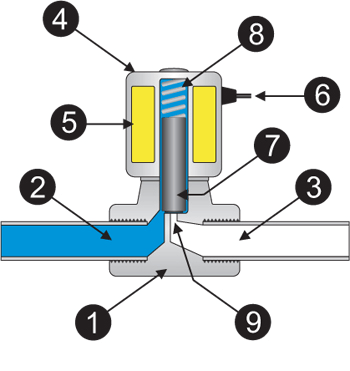 In general, seals are the most limiting factor when selecting a solenoid valve. When selecting the material for the seal it is important to consider the chemical properties of the media, and temperature and pressure of the media and system. The most common seal material choices are nitrile rubber (NBR), ethylene propylene diene monomer rubber (EPDM), Viton®, and PTFE.

The solenoid valve coil converts electrical energy into linear motion. It is usually made of copper or aluminum wire wound around a hollow form. A ferromagnetic core, called the valve plunger, is placed inside the coil. As electric current flows through the coil, the lines of magnetic flux turn the plunger into an electromagnet, creating a magnetic field. The valve body orifice opens as the magnetic field pulls the plunger further up into the coil.  Polarity of the coil does not matter because most coils with lead wires use the same color wire for both terminals and the positive terminal can be connected to either wire without affecting the operation of the valve. There are two types of coils that can be used in a solenoid valve. 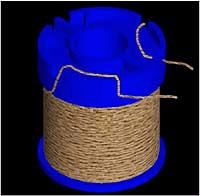 Solenoid valve coils are available in different voltages and can be used with DC or AC electricity. It is often possible to change coils out in order to use a different voltage for the valve.

Solenoid valves generally have two ports. The ports can come with either inside or outside threaded ports. In a tandem center solenoid valve, the pressure and tank ports are connected while the service ports are blanked. This allows system unloading while still providing isolation of the service lines. In a float center solenoid valve, the supply pressure port is closed. All others ports are interconnected. This allows the supply to be shut off while enabling the load to move or free wheel with flow available to other services.