Power transformers convert power-level voltages, as opposed to electrical signals, from one level or phase configuration to another. They are used to increase or decrease voltage to suit a specific application, and are widely used in electrical power distribution systems. For basic information about a transformer's construction and operation, please visit Engineering 360's Transformers Selection Guide.

The image above shows a typical power distribution system. Because power plants must ultimately provide electrical power to potentially remote locations, they generate high voltages to transmit the current to these areas. Multiple power transformers must be incorporated into to the system in order to gradually step down the voltage for safe residential use. Transformers may be used:

While most consumers are familiar with the transformer drums found on power line poles, power transformers represent a large variety of products suited to various applications. For example, alternating current (AC) adapters, also known as wall warts or plug packs, are simple rectifier transformers that convert AC mains electricity to lower voltage direct current (DC) for use with handheld devices. The image below shows a schematic diagram and DC output of a very simple AC adapter. The power transformer is the coiled diagram at left, while the rectifier is the diamond shape in the center. 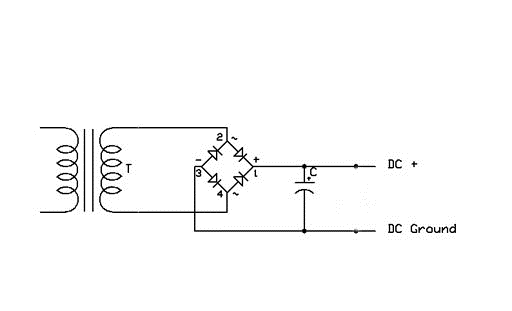 Autotransformers are constructed with only one wound coil and can produce various selectable output voltages from a single input voltage. The single coil acts as both the primary and secondary coil, with the output voltage depending on where electrical connections on the coil are made. Autotransformers do not provide electrical isolation, but are smaller, lighter, and cheaper than dual winding transformers. These devices are often used to step voltages up from 220-240 V to 110-120 V for residential use. 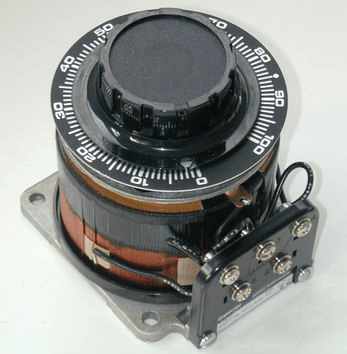 Flyback or line output transformers are specialized transformers originally designed to control cathode ray tubes (CRT) in televisions and monitors. Flyback transformers can sometimes be mistaken for specialized inductors in that, when input voltage is applied, current is stored in a magnetic core; when switched off, the secondary coil rapidly ramps up the output voltage, then safely ramps it down in a sawtooth wave (as opposed to the sine wave of the input voltage). 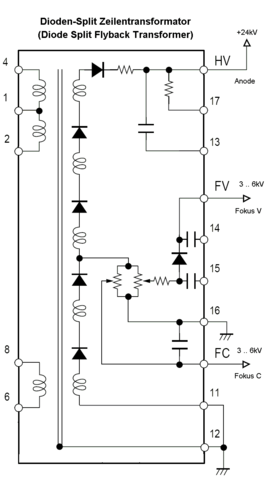 Distribution transformers are pole-mounted devices that provide the final step-down action in a power distribution system. These devices supply relatively small amounts of power to residences and other locations connected to a power grid. They typically have high power and continuous voltage ratings. 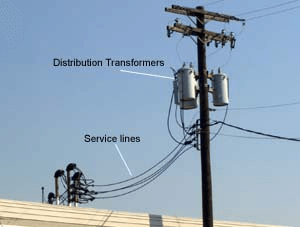 A group of pole-mounted distribution transformers

Substation transformers are much larger devices installed at power distribution substations. They are used to step voltage up or down for transmission purposes.

Maximum primary voltage represents the maximum input voltage range. Buyers should determine the maximum voltage needed for their specific application and search using this number. Because a transformer may feature more than one input voltage, a datasheet will specify the maximum as well as all additional input voltages.

Maximum secondary voltage specifies the maximum output voltage range; this range should be queried in the same manner as the maximum primary voltage.

Direct current resistance (DCR) is the resistance of the transformer measured in DC current. Transformer manufacturers attempt to minimize DCR, therefore it is expressed and queried as a maximum value.

Split core transformers are constructed using a unique hinge and locking snap to allow electrical connection without interrupting the current-carrying wire. They provide a low cost method for monitoring current.

Toroidal core devices consist of copper wire wrapped around a cylindrical core, preventing the magnetic flux that occurs within the coil from leaking.