They are composed of epoxy resins. All epoxies are formed as a result of the reaction between an epoxide and a polyamine hardener; for this reason epoxies are often referred to as copolymers. Epoxy adhesive systems may or may not include chemical modifiers. Unmodified epoxies cure to hard, brittle solids, while other adhesives are modified for increased flexibility or toughness after curing. All cured epoxies are typically hard and rigid.

Epoxy adhesives are available as one- or (more commonly) two-component systems. One component systems use heat curing and require cold storage for sufficient shelf life. Most one component epoxies are sold as pastes and applied by a trowel to easily fill gaps. Epoxy film adhesives, a subset of one component epoxies, are very high performance substrates based on epoxy resins formulated with curatives and modifiers. These provide excellent strength, fatigue resistance, and temperature resistance. Epoxy film adhesives are frequently used to bond large areas in the aerospace industry.

Two component epoxies must be mixed and applied within a set time frame, ranging from a few minutes to hours. While these adhesives are designed to cure at room temperature, heating can speed the curing process. Two component epoxies are suitable for bonding nearly all substrates and feature high strength and chemical resistance as well as excellent long-term stability. Despite these superior characteristics, two component systems are often avoided in favor of one component ones due to the latter's easier use and storage requirements.

This video provides an excellent detailed overview of two component epoxy systems and their composition, use, and curing. As noted above, an epoxy adhesive's composition determines its curing method: one component products are heat cured, whereas two component adhesives are cured at room temperature.

The table below details some differences between cure methods from the standpoint of a thermoset adhesive.

In heat-cured adhesives, cure and adhesion are not achieved until the adhesive is heated above a certain temperature. Two component epoxies are thermosetting adhesives, meaning they are chemically and irreversibly set through heating. Thermosetting adhesives have a very high heat resistance after curing, and as such cannot be melted down and reset after adhesion. 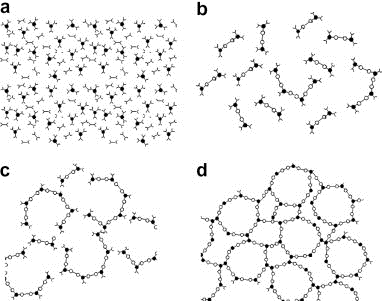 Curing of a thermoset adhesive as heat is applied. Image credit: Science Direct

Epoxy adhesives that cure at room temperature are simply allowed to cure at ambient room conditions, but cannot be confined to an enclosed space due to their need for ambient moisture. These products typically take 30 minutes to 4 hours to cure, and must be stored at decreased temperatures to achieve acceptable shelf life.