Gearmotors are electric motors that utilize a type of gear system on the output of the motor. This gearing arrangement is called a gear reducer or gearbox. The combination of an electric motor and gearbox reduces design complexity and lowers cost, particularly for motors built for high torque and low speed applications. In addition, gearboxes can be used as a means to reorient the output shaft in a different direction.

The first step in selecting a gearmotor is determining the type of motor. A gearmotor can be classified in a number of different ways, but the primary distinction is whether it is an AC motor or DC motor. This designation defines the power source requirements of the motor (AC or DC) and can affect a number of other performance factors such as cost, reliability, and speed control complexity. For more information on the characteristics of these different classes of electric motors, visit How to Select AC Motors and How to Select DC Motors on IEEE GlobalSpec.

Some other specific types of motors to consider are DC servomotors and stepper motors.

DC servomotors have an output shaft that can be positioned by sending a coded signal to the motor. As the input to the motor changes, the angular position of the output shaft changes as well. Servomotors are generally small and powerful for their size, and are easy to control. Visit the DC Servomotors Selection Guide for more information.

Stepper motors provide incremental motion, or steps, in response to pulses of current that alternately change the polarity of the stator poles. Step motors do not require feedback and are sometimes used in "Open Loop," or no-feedback applications. Visit the Stepper Motors Selection Guide for more information.

Gearmotors may contain many types of gearboxes which differ mainly based on the construction and arrangement of the gears. The operational characteristics of gearboxes are largely dependent on these different configurations.

Spur gears are the simplest type of gear, with straight teeth mounted on a parallel shaft. Spur gearboxes include on

e or more sets of pinion-gears, in which one pinion drives one gear. These sets can be stacked or cascaded to achieve higher reduction ratios. Spur gear systems are versatile, and can come in a range of sizes and gear ratios to meet specific torque and speed requirements.

Planetary gear heads involve several gears per stage rather than one pinion-gear set. A "sun gear" drives multiple planet or satellite gears, which then mesh on the inside of an internal (annular) gear to provide relatively high torque and power transmission ratings.

Worm gearing uses right-angled drives in which a worm drives a wheel coupled to the output shaft or shafts. This arrangement is used for high reduction and compact right-angle power transmission. Because the wheel cannot turn the worm it can be used as a braking system for the gearbox. The gears are designed to handle high shock loads.

Bevel gear sets have intersecting axes that are commonly, but not always, perpendicular. They mate via teeth on angled edges. The teeth can either be straight or spiral. Straight bevel gear teeth are used for slow speed applications, while spiral teeth are used for higher speed and performance requirements.

There are a number of other standard and specialized gear arrangements available depending on the application. One special type of arrangement is strain wave gearing, also known as harmonic drive. Harmonic drives are extremely precise speed reduction systems which transmit power via a rotating elliptical element that engages a flexible cup that then engages an internal gear (typically fixed). This power transmission delivers precise angular position in very high input-to-output ratio (50:1 & up) applications.

There are a number of performance specifications to consider when selecting a gearmotor.

Gear ratio, gearbox ratio, or reduction ratio is the ratio of the velocity of the input gear to the velocity of the output gear in a gearbox. A ratio greater than one indicates speed reduction, while a ratio less than one indicates speed increase. This ratio is directly proportional to the correlation between the numbers of teeth of different gears in the system. If an output (driven) gear has 20 teeth and an input (drive) gear has 10 teeth, the gear ratio would be 2:1. In compound gearing configurations, the overall ratio is the product of the ratios of each connection.

Speed (RPM) is the rotational speed of the shaft generated by the motor, expressed in rpm (rotations per minute). The shaft speed in a gearmotor is proportional to the gear ratio. The output speed can be found by dividing the input speed by the gear ratio. Gear ratios above one will reduce speed, while those below one will increase speed.

Gearbox efficiency is the percentage of power or torque that is transferred through a gearbox. Manufacturers typically specify the gearbox efficiency as part of the gearmotor specifications list to indicate overall gearbox performance. This efficiency factor takes into account losses that occur due to friction and slippage inside the gearbox.

Backlash is the angle that the output shaft of a gearbox can rotate without the input shaft moving, or the gap between the teeth of two adjacent gears. For applications without load reversals or reverse-operation, this factor is insignificant. However, in precision applications where load reversals occur (such as robotics, automation, CNC machines, etc.), backlash is crucial to consider for accuracy and positioning. 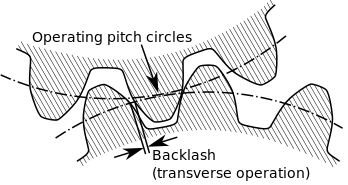 Another important factor in gearmotor selection is the orientation of the output shaft. Shaft orientation can affect motor size and footprint, as well as motor performance and load delivery.

An in-line output shaft has its axis in-line with the axis of motor rotation. This orientation is ideal for high reduction ratios and high-torque applications. An offset or parallel output shaft has its axis parallel with, but not concentric to, the axis of motor rotation. This orientation is often an optimal solution for space-saving drive requirements.

A right angle output shaft has its axis perpendicular to the motor rotation axis, intersecting or nonintersecting. This orientation is ideal for short reduction ratios and compact applications.

Most industrial gear motors are AC-powered, fixed-speed devices, although there are fixed-gear-ratio, variable-speed motors that provide a greater degree of control. DC gear motors are used primarily in automotive applications such as power winches on trucks, windshield wiper motors and power seat or power window motors. Jacks, cranes, lifts, clamping, robotics, conveyance, and mixing are just some of the applications gearmotors are used for in industry.