Taps are used to cut female threads on the inside of holes, a process called tapping. Similar in appearance to a screw, taps have threads that are used to cut into the material being tapped as the tap is turned.  After a hole has been drilled with a tap drill, it is ready for tapping. 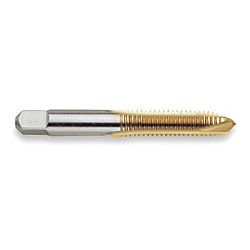 Taps usually have 2 or 4 Longitudinal grooves, referred to as flutes, that run through the threads and create the cutting edges on the thread profile.  Flutes also allow for passage of chips and cutting lubricant.  Flutes can be straight, angular or spiral.  The threaded end of the tap has a taper or chamfer to help guide it and introduce the threads to the material as it enters the hole.

The non-threaded end of a tap consists of a shank that ends in a square, and is used for holding the tap by a tap wrench or machine collet. A tap wrench is a two-handled wrench that is either fixed or adjustable. Adjustable wrenches may be used with various size taps.

Taps are manufactured of hardened carbon steel or high speed steel and  can break easily if unnecessary force is applied. Taps are designed and manufactured to meet most industry specifications.

There are three types of hand taps: 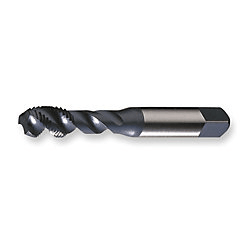 Taps are necessary for repairing threads in stripped holes or bolts. All modern equipment has nuts and bolts, and cannot be made without taps.